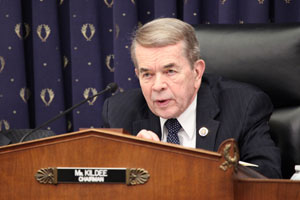 Rep. Bart Stupak (D-Mich.) wants pro-life Dems to join him in voting against the Democrats’ health care bill unless there are significant abortion restrictions. But Stupak has a surprising obstacle in his path: his old friend Rep. Dale Kildee (D-Mich.). Kildee isn’t just opting out of his pal’s voting bloc: He told reporters on Friday that he’s been working hard to convince other anti-abortion Democrats to abandon Stupak’s effort. As the final hours before the vote tick down, the battle between these two Democrats could determine the fate of the party’s biggest legislative priority.

Kildee and Stupak have much in common. They’re both pro-life Democrats from Michigan. They’re been social and political comrades for years. Kildee, who’s 81, knew the 58-year-old Stupak when Stupak was a young Michigan state trooper. But for now, at least, the two lawmakers are on opposite sides of the dramatic health care tussle.

Stupak, who sponsored a strict anti-abortion amendment that was added to the House version of the health care reform bill, maintains that the Senate’s plan (which doesn’t contain his amendment) allows for federal funding of abortions. Kildee disagrees. Neither doubts the sincerity of the others’ beliefs—at least according to Kildee. But while Stupak is trying to hold together a bloc of pro-life Dems that he claims will join him in voting against the Senate bill, Kildee has been pressing other members to accept his position that the Senate bill is “without any question” pro-life.

“I’ve always been pro-life,” Kildee said, adding, “I’m 81 years old and I’m not going to change my mind now. I’m not going to jeopardize my eternal soul.” Confidence in his own position has allowed Kildee to lobby “a number” of other anti-abortion Democrats to vote for the legislation, which is scheduled to come up for a vote on Sunday afternoon. “God willing, I’ve changed a few votes,” Kildee remarked.

But he hasn’t convinced Stupak. “We’ve agreed to disagree,” Kildee said. Recently, Stupak has been making noise about a possible compromise (perhaps his friend’s arguments are having an impact), and multiple outlets reported on Friday night that Speaker Nancy Pelosi had struck a deal with Stupak to allow a vote on a “concurrent resolution.” explained how this might work:

[The deal] would add tougher abortion restrictions to the bill after it is approved but before it is sent to the president — a technique typically used to make minor or technical changes with the consent of both chambers, an unlikely prospect.

But the House pro-choice caucus threatened to bolt en masse, and Stupak later cancelled a press conference he had planned for Saturday morning. That was probably a smart strategic move. Holding a last-minute presser would mean Stupak would face put-up-or-shut-up time. If he can produce at a press conference—or any other time—the 11 or 12 House Democrats he has claimed are with him, health care reform could be in serious trouble. If his allies are much less than that, the bill’s passage could become a foregone conclusion. Half-dozen or so House Democrats who voted against the bill in November have announced they will vote for the Senate bill on Sunday, and that spell problems for Stupak. If his gang is much smaller than the group of no-to-yes switchers, Stupak will be irrelevant. (I’m on the Hill Saturday to count Stupak’s allies, so stay tuned.)

Stupak’s public waffling about what once seemed to be an unshakeable stand has lcaused some vote-counters to wonder whether the congressman wants to vote for health care reform, realizing he’s wrong about the bill funding abortion, but has backed himself into a corner. With that in mind, I asked Kildee about Stupak’s statement that he relies on groups like the National Right to Life Committee and Focus on the Family (groups that have generally opposed the Democrats’ health care reform plans) for guidance. Kildee questioned the wisdom of depending on these outfits. Members of Congress have to be wary of groups that “start out with a premise and only seek out facts that support their premise,” Kildee warned. He added, “You have to know where they come from. You have to know what their purpose is—they gather information that supports their purpose.”

Some of the individuals and groups that have endorsed Kildee’s argument that the Senate bill is sufficiently anti-abortion came to the Hill on Friday to back Kildee. These pro-lifers included nuns who signed a letter supporting the bill; Professor Tim Jost, an expert on health law who has written detailed analyses of the Senate health care bill’s abortion provisions; and other academic and faith leaders. After the press conference, several of the attendees, including Jost, headed over to of Rep. Brad Ellsworth (D-Ind.). Ellsworth, who had been considered a potential member of Stupak’s bloc, announced on Friday afternoon that he would vote for the Senate bill. He cited the nuns’ letter as evidence that the bill doesn’t fund abortion. 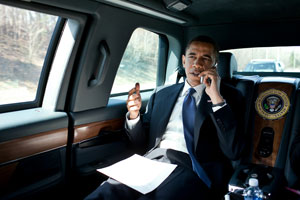 President talks to a Member of Congress. | White House photo/Pete Souza (Government Work).There’s one more factor that could influence Stupak and other wavering House Dems: President . The White House has been eagerly telling reporters that the president is working the phones, trying to get members of Congress on board with his plan. (He’s apparently had 64 meetings or phone calls will members of Congress on health care reform during this week.) They even went so far as to release the photo to the right, of Obama making a call during his trip back to the White House after a health care rally Friday.

On Saturday, the president will continue his pitch in person. He and Senate Majority Leader Harry Reid (D-Nev.) will address a meeting of House Democrats at 3 p.m. We’ll be there to let you know how it goes.