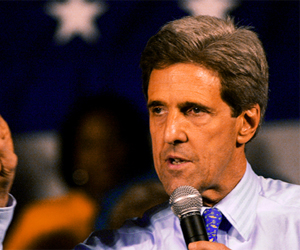 Well, if lions and lambs can work things out, why can’t John Kerry and Swift Boat Veterans for Truth? Politico is reporting that, in his search for support on a climate change bill, the Massachusetts senator is reaching out to an old political foe: the billionaire energy maven (and brillantly named) T. Boone Pickens.

Pickens has acquired some juice, earned or not, in the past couple of years as an advocate for alternatives to fossil fuels. But he was also the overstuffed wallet behind the Swift Boat campaign against Kerry in the 2004 presidential election—a campaign that’s become, in many ways, the model for today’s GOP and the Tea Parties. At the time, Pickens gave the Swift Boaters $3 million and offered another $1 million prize to anyone who could debunk the group’s attack ads. (He subsequently reneged when some former sailors did just that.)

Back then, Kerry was not a happy camper. “It is disturbing that in reaffirming the challenge you issued, your parsing and backtracking seems eerily reminiscent of the entire approach of the SBVT,” Kerry wrote in an open letter to Pickens during the campaign. “Say one thing, put out an allegation, then duck and weave, hedge and bob when your words catch up with you.”

But none of that seems to matter now. According to Politico, Kerry’s olive branch “suggests that he, Graham and Lieberman are gearing up to try push through a climate change bill before the looming 2010 midterm elections, which are expected to make legislating tougher.” Either that, or Kerry wanted to meet one of the few Americans who are richer than he is, you know, just to change things up.

In other Swift Boat schadenfreude news: Bob Perry, another big donor to the attack-ad campaign, just got socked with a $51 million court settlement for building shoddy homes—a practice that MoJo first reported on five years ago. Which means some GOP candidates and crazy secessionist governors might not be getting their usual campaign contributions from Perry for a while. “One can at least take pleasure in the likelihood that he’s suffering today,” said the Guardian‘s Michael Tomasky. “Not just because he financed a group of ideological hate-mongers, but because he also appears to be at least a partially lousy human being.”