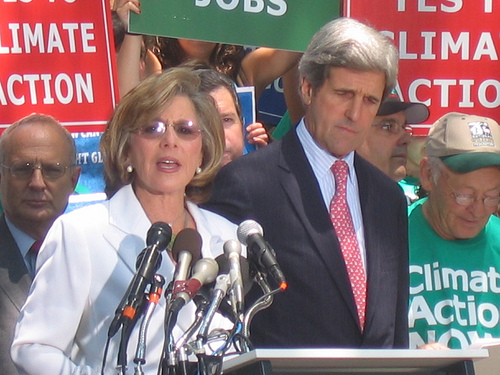 When John Kerry introduced the climate bill last September that he co-authored with Barbara Boxer, he heralded action to stop global warming as “one of the most important battles we will ever face, as legislators and as citizens.” But after that measure failed to gain traction, Kerry embarked on a new legislative process with Lindsey Graham (R-S.C.) and Joe Lieberman (I-Conn.)–and now says addressing climate change will be merely a superfluous benefit of passing the legislation that they are expected to introduce any day now.

In an interview with the Associated Press, Kerry suggested that his pollution-cutting plans are only an afterthought. “It’s primarily a jobs bill, and an energy independence bill and a pollution reduction-health-clean air bill,” said Kerry. “Climate sort of follows. It’s on for the ride.”

As I reported last week, House members are already more than a little nervous about what a Senate bill might actually look like. Kerry affirmed that his bill may be unrecognizable from what the House passed last summer. “It will be a very different mix of a bill from where we were at the end of the House effort,” Kerry said. “It will be simpler, and hopefully, capable of attracting support.”

He also insisted that this isn’t just a rhetorical shift to abandon the term “cap and trade” that has been successfully demonized by foes. “This has nothing to do with branding … This is a different bill. It will have a different structure,” said Kerry.

There are plenty of questions about whether the senators’ alternative measure will be able to meet the same climate goals as previous bills, especially if it ramps up energy incentives (many of which aren’t very environmentally friendly) in order to draw additional votes. Supporters have long touted this effort as a comprehensive package that can deliver both the energy and environmental benefits, and most have scaled back expectations on the environmental side as Senate negotiations continue. That Kerry is now dropping the idea that it’s a climate bill at all can’t be a good sign for where those negotiations are heading.