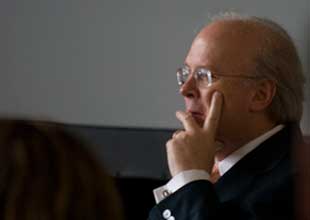 With his soon-to-be-released book, Karl Rove is trying to mount something of a rear-guard action in the war over George W. Bush’s legacy. According to the AP, which has obtained a copy of the book, Rove

blames himself for not pushing back against claims that President George W. Bush had taken the country to war under false pretenses, calling it one of the worst mistakes he made during the Bush presidency. The president, he adds, did not knowingly mislead the American public about the existence of [weapons of mass destruction].

And The New York Times reports that in the book, which will hit stores on Tuesday, Rove writes that his failure to counter the narrative that “Bush lied” was “one of the biggest mistakes of the Bush years.” Rove adds, “did Bush lie us into war? Absolutely not.”

Here we go again: Did Bush grease the way to war with lies? Having written two books on the subject—The Lies of George W. Bush and (with Michael Isikoff) Hubris: The Inside Story of Spin, Scandal, and the Selling of the Iraq War—I have some skin in this game.

Let’s cut to the bottom line: prior to the Iraq war, US intelligence generally produced faulty information overstating Saddam Hussein’s WMD capabilities, which were actually nonexistent. But Bush and his crew purposefully and callously overstated these overstatements—and made dramatic and untrue assertions unconnected to the flawed intelligence—in order to whip up popular support for the invasion of Iraq. Mother Jones has produced a timeline that lists the false Bush administration assertions. And to remind Rove—and book reviewers—here’s a limited sampling of notable whoppers, reported in my books and elsewhere.

I could go on. Remember Colin Powell’s lengthy UN presentation? Practically every relevant fact in it proved to be false. Rove can argue that in the run-up to the war, Bush and the others believed what they were saying about Iraq’s WMDs. But Bush and his crowd demonstrated a profound disinterest in sorting out the truth. They made no effort to distinguish between known facts and convenient suppositions. They exaggerated. They trumped up unconfirmed pieces of information. They presented rosy assumptions. They overlooked or discounted data that didn’t advance the cause.

It was a PR campaign girded with misrepresentations and false statements. Rove contends that his old boss did not knowingly bamboozle the public. (Bush, though, did in a January 2003 meeting with Tony Blair raise the idea of staging an incident—in which US reconnaissance planes painted in UN colors would fly over Iraq and try to draw fire—to provoke an excuse for war.) But Bush, Cheney, and other administration aides exercised a thoroughly reckless disregard for the truth, as they pushed an utterly phony and over-the-top case for invading Iraq.

As Rove makes the rounds on his book tour, he ought to be pressed on all this. There is no doubt that the Bush posse mischaracterized what was known and not known about WMDs in Iraq. It was easy—and useful—for them to do so, for they didn’t care to get this right. (After all, as Rove writes, the Iraq war would have likely not occurred without the WMD argument: “Congress was very unlikely to have supported the use-of-force resolution without the WMD threat.”) Bush and his aides, Rove included, were not looking to lead an informed debate based on the best information available; they were aiming to start a war. Almost by any means necessary. They spun the nation into Iraq—and now Rove is spinning to cover that up.