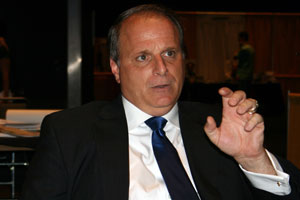 Former Rep. Eric Massa (D-N.Y) claims that he was “forced out” of Congress by Dem leaders because of his opposition to health care reform—not because of sexual harrassment allegations that surfaced last week. That accusation is “absurd,” House Majority Leader Steny Hoyer (D-Md.) told reporters in a forceful exchange Tuesday morning. “It’s absolutely untrue that there was any relationship” between what happened to Massa and health care, Hoyer said.

While it’s true that Massa’s departure makes passing health care reform a bit easier, the former congressman’s explanation for his retirement has changed repeatedly in recent days. On Wednesday, he said that a recurrence of cancer would require him to retire. The next day, after Politico reported that a male staffer had filed a sexual harrassment complaint against Massa, the Congressman told TPM’s Brian Beutler that the allegations were “totally false” and he was just a “salty old sailor.” On Friday, Massa issued a statement assuring his constituents that “there is no doubt that this Ethics issue is my fault and mine alone.” Then, on Sunday, Massa went on a local radio show in his district to explain that Dem leaders—including White House Chief of Staff Rahm Emanuel—were part of a conspiracy to end his political career.

Despite Hoyer’s denials, Massa appears to be sticking with his latest story. He’s still scheduled to spend an hour talking about the subject on Glenn Beck’s Fox News show tonight. “All Americans need to hear him,” Beck says.