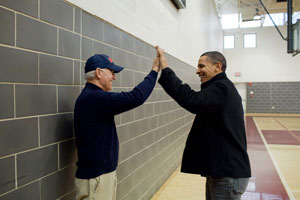 It took President Barack Obama and an executive order, but in the end, the Democrats got the deal they need to pass health care reform.

The White House and Rep. Bart Stupak (D-Mich.), the leader of a group of anti-abortion Democrats, reached a deal late Sunday afternoon on an executive order reiterating that the health care bill does not fund abortions. The final deal falls short of Stupak’s ultimate goal: forcing people who receive tax credits to help pay for insurance to buy special, separate “riders” (basically abortion-only insurance plans) if they want abortion coverage. As it stands, people who receive tax credits and want abortion coverage have to pay for it with a separate check, but the abortion coverage doesn’t have to be a separate “rider” policy. Stupak has apparently decided, after taking the Democrats’ historic push for health care legislation to the brink of failure, that he can settle for that.

“You’re not going to find Stupak language” in the executive order, the congressman admitted at a heavily attended Sunday afternoon press conference announcing his decision. Stupak tacitly acknowledged he had settled for less than his ideal. “We’d rather have a statute,” he said. But he didn’t get it. Earlier today, I wrote that there were two ways to understand Stupak: either he just wanted his moment in the spotlight and would compromise once given sufficient cover by the White House, or he really was prepared to stand his ground and let health care stand or fall on the issue of abortion funding.

Stupak chose the first option. By taking this deal, he has decided that his major goal was less important than passing health care reform. Perhaps at some point the Stupak bloc either realized they were wrong or decided they were fighting an unwinnable battle. As Rep. Steve Driehaus (D-Ohio), a Stupak ally, said at the press conference, the executive order provides them with political cover aplenty. The Stupak bloc “wanted to make sure that it was crystal clear to the American people” that the bill doesn’t fund abortion, Driehaus says. The executive order definitely helps on that front. But many reasonable people already knew what it took Stupak, Driehaus, and their friends months and months to figure out.