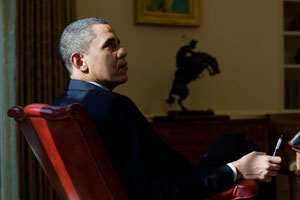 If you haven’t been living under a rock, you’ve probably heard that the House plans to vote on the Senate’s health care reform bill later this week—probably on Friday or Saturday. That means this is the final push. I’ve written about the opposition from the left, but the truth is that most progressives support passage. The bill’s real opponents are a lot more powerful. Corporations, boosted by a Supreme Court ruling that they can spend whatever they want on politics, are throwing millions behind an effort to convince skittish House Dems to vote against the bill. You’ll never guess who’s leading the charge:

The coalition of groups opposing the legislation, led by the United States Chamber of Commerce, is singling out 27 Democrats who supported the health care bill last year and 13 who opposed it. The organizations have already spent $11 million this month focusing on these lawmakers, with more spending to come before an expected vote next weekend.

An alliance of groups supporting the health care plan, which works closely with the White House and Democratic leaders, had been spending far less and focusing on fewer districts. But after pharmaceutical companies made a $12 million investment for a final advertising push, spending by both sides for the first time is now nearly the same.

Thankfully for the bill’s supporters, the left is, to borrow a phrase, “fired up and ready to go.” The Service Employees International Union (SEIU) has told reluctant Democrats that it will back primary challengers for Dems who vote against reform. MoveOn.org is threatening the same. And there is zero doubt that the White House will throw its full weight behind helping Nancy Pelosi gets the votes she needs. Barack Obama even postponed his trip to Australia and Indonesia to make sure he would be around for the final push. So what are the chances the thing passes? Polling expert Nate Silver says “no lower than 50 percent, and no higher than the 64 percent posited by Intrade.”

In the end, the outcome may ride on how many Dems agree with Slate‘s Will Saletan that their vote on health care is more important than their reelection. I think passing the bill is actually the best option left to the Dems from a political standpoint (failure or giving up would be even more disastrous). But there’s little doubt that, bill or not, the Dems will lose seats in November. While many reasonable people don’t think a “yes” vote on health care would cost a Dem his or her seat, some members of the House believe it might—and that’s what matters. If Pelosi or Obama can convince those members to vote “yes” regardless of the potential consequences, the bill will pass. If they can’t, it probably won’t.