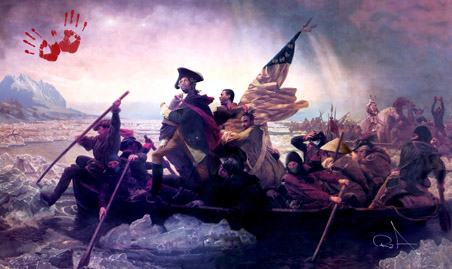 George Washington and his clan of Brit-fighting revolutionaries were black men. Not just any black men, but hip-hop pioneers who gained indie swagger from their scores and cameos in Jim Jarmusch films. MoJo readers, do not fret. This may be historically inaccurate, but you gotta admit it’s an awesome concept. So consider Victory or Death, a re-creation of the familiar 1851 Emanuel Leutze painting depicting Washington’s crossing of the Delaware. In which our founding father is replaced by RZA—leader of hip-hop’s Wu-Tang Clan.

When Art Imitates Life (WAIL), a new venture developed by Sway of MTV and Tech of “The Wake Up Show,” asks respected musical artists to come up with visual concepts—ill illustrations—and then has a crew put them on canvas. RZA opted to re-create (art) history by including himself in the epic 1776 voyage that helped emancipate New Jersey from Hessian and British rule.

In the limited-edition print (360 total), the rapper/actor/producer stands majestically near the stern adorned in colonial garb, leading his brigade (Ol’ Dirty Bastard, GZA, and some samurais) across the icy waters. A blunt may or may not be embedded in the appropriated tableau. And unlike the original painting, which was created as an ode to a daring military operation, RZA’s boat is bound for a more personal conquest. “Before Wu-Tang Clan became popular we were living in the streets,” he told MoJo. “George Washington, the first American president; he started a whole new world. He had to fight for that. He had to go through a struggle for that. Victory or Death was his struggle. And I felt like I had that same struggle.” (“Victory or death” was used as a password during the real battle.)

The only black man featured in the original Leutze painting was Prince Whipple, a former slave turned general’s ally—seated at the bow with his face mostly obscured. A black rapper posing in lieu of the general might strike some folks as historical blasphemy. But it’s nothing new for outsiders to thrust themselves into canonical masterpieces: Yasumasa Morimura appropriated Manet’s Olympia, posing as the courtesan and the black servant; Cindy Sherman presented herself as the Greek god(dess) of wine—copying Carravagio’s Bacchus.

WAIL is also at work on visual projects with DJ Q-Bert, the Hieroglyphics, and System Of A Down’s Shavo.  Details are under wraps for now. “Those won’t be recreations, but brand new pieces that bear no similarity to anything you’ve seen before,” says James Dunn, WAIL’s rep. But doing mashups of pop and hip-hop with high art has an added benefit: Giving the canon a little diversity injection might make it more attractive to people who wouldn’t be interested otherwise. “It’s a good thing for culture,” says RZA.