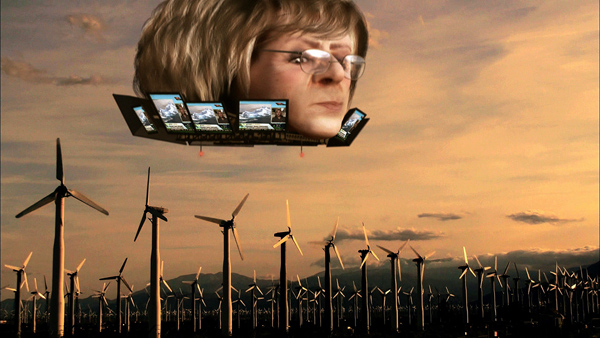 The ad guy behind the Demon Sheep brings us a new video for California Republican Senate candidate Carly Fiorina that’s almost as bizarre as its predecessor. It features a giant Barbara Boxer head floating over wind farms as a voiceover decries her support of cap and trade — and it only gets weirder from there.

Giant Floating Head of Barbara Boxer’s mistakes include “proclaiming her cap-and-trade bill would clean the environment, indifferent that it would take already painful jobless numbers and make them dramatically worse,” says the creepy narration.

The nearly 8-minute ad is from Fred Davis, the same guy who made the demon sheep ad. Some have dubbed it the “HindenBoxer.” Like its predecessor, it’s strange enough to get people talking. The concept is that Boxer’s power in Washington has swollen her ego and … caused it to take flight. “She quit working for us, and starting working only for herself,” it says.

On climate, at least, it’s worth noting that Fiorina was once supportive of efforts to curb emissions–at least before she challenged Boxer, who has made climate change one of her signature issues. Fiorina even touted John McCain’s support for cap and trade in her speech at the 2008 Republican National Convention.