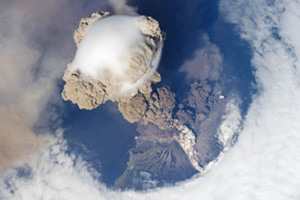 For years, climate scientists have used computer modeling rather than field tests to predict the likely effects of certain geoengineering methods—like whitening clouds or dispersing sulfur particles into the upper atmosphere to reflect the sun’s rays back into space. But at last week’s Asilomar International Conference on Climate Intervention Technologies, researchers were divided over whether models are enough.

In one corner was Alan Robock, a professor at Rutgers University who has spent most of his career modeling the climate-cooling effects of volcanic eruptions—which spew sulfur dioxide into the upper atmosphere. Indeed, it was knowledge gained from the 1991 eruption of Mount Pinatubu in the Philippines (here’s a pdf of one of Robock’s papers) that inspired one of the more controversial geoengineering schemes. Robock says that one recent Russian eruption he is studying put more sulfur in the atmosphere than any scientific team would likely deliver. “So why do we have to actually do tests?” he asks.

Robock has no problem with small-scale testing of the equipment and mechanisms that humans might need to introduce sulfur into the atmosphere, or to make sure we have the right gear to whiten clouds. But computer models, he argues, can already predict how the atmosphere will react to a global-scale release. And scientists can ensure accuracy by cross-checking their results against those obtained by dozens of colleagues.

Not so, counters fellow Asilomar attendee David Keith, who studies climate at the University of Calgary. “I work in experiment and theory,” he says. “If you just do theory, you miss stuff.” The presence of the ozone hole, he notes, was confirmed by ground readings in Antarctica; researchers crunching the satellite data had dismissed readings indicating that ozone was being depleted. “It took a real human presence to get it right,” Keith says.

To really understand the planetary response to something as massive as lacing the upper atmosphere with sulfur, he adds, you have to do it on a large scale and over long periods—maybe as long as a decade. Otherwise, Keith says, you won’t be able to distinguish between natural weather variations and variations caused by the experiment.

But this very difficulty, Robock insists, is precisely why computer models are superior: You can tweak your models and run them over and over to find variations in the results. “No one gets hurt,” he says. Ah, counters Keith, but what if you’ve got it wrong? “With computer models you can get into a trap where you think the model is the real world and it is not.”

For the time being, the argument is strictly academic: Nobody has developed a cost-effective way to introduce millions of tons of sulfur into the upper atmosphere. And to pull off a major test would require unprecedented international cooperation, regulation, and oversight—not to mention global political will. Says Keith, such a thing might be considered within a decade—or 75 years. “Who knows,” he tells me. “We might even decide it’s a third rail and never want to go there.”