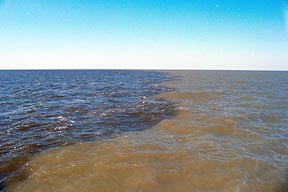 A new paper in the journal Science reveals that oxygen-deprived (hypoxic) dead zones in the oceans have a far bigger impact than killing fish in local waters. The increased amount of nitrous oxide (N2O) produced in hypoxic waters can elevate N20 in the atmosphere—fueling more global warming and growing bigger atmospheric ozone holes.

Nitrous oxide is a highly potent greenhouse gas and is becoming a key factor in stratospheric ozone destruction. Dead zones are a result of climate change, eutrophication, and changes in ocean currents. The author of the study, oceanographer Louis Codispoti of the Horn Point Laboratory, says:

“As the volume of hypoxic waters move towards the sea surface and expands along our coasts, their ability to produce the greenhouse gas nitrous oxide increases. With low-oxygen waters currently producing about half of the ocean’s net nitrous oxide, we could see an additional significant atmospheric increase if these ‘dead zones’ continue to expand.”

Currently, the number and size of dead zones worldwide is doubling every decade (405 worldwide, last count)—including dead zones covering nearly all of the eastern and southern coasts of the US. The drivers behind most of these dead zones are human activities (fertilizers, livestock farming, burning fossil fuels).

When suboxic (little or no oxygen) waters occur at depths of less than 300 feet, the combination of high microbial respiration rates, plus a process called denitrification, can drive N2O production rates 10,000 times higher than average for the open ocean. Because the ocean is a net producer of N20, much of it will be lost to the atmosphere, driving up the climate impact. The future of marine N2O production depends critically on what will happen to the roughly 10 percent of the ocean volume that’s currently hypoxic and suboxic:

“Nitrous oxide data from many coastal zones that contain low oxygen waters are sparse, including Chesapeake Bay,” says Codispoti. “We should intensify our observations of the relationship between low oxygen concentrations and nitrous oxide in coastal waters.”