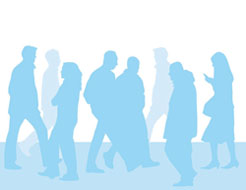 The 2000 Census data were used to create a synthetic (virtual) US population that helped simulate the spread of infectious outbreaks, including H1N1. The 2010 Census data will do more of the same. And more.

The project is part of the Models of Infectious Disease Agent Study at the NIH. It took the country’s 2000 population of 281 million people and 116 million households to create a synthetic population, which doesn’t exactly reproduce your hometown, but comes close.

Since the census protects individual privacy, the synthetic population is anonymous too—though it does provide population, household sizes, family incomes, and residents’ ages and ethnicities for every town, county, and state in the nation. Plugging all this information into computers, the researchers created a mirror image of the country with the same demographics as the real one.

Disease modelers can now manipulate all or selected parts of the ready-made synthetic population—the entire country, for instance, or just one town. They can also program virtual citizens to behave in certain ways: some choose vaccination, others don’t.

The synthetic population will also enable modelers to study the impact of social networks on disease spread. Researchers can track where synthetic individuals work or go to school, who they live with, and who they’re likely to meet running errands. Since people get sick when they come into contact with others who’ve been infected, studying social patterns in models should help in understanding the real world.