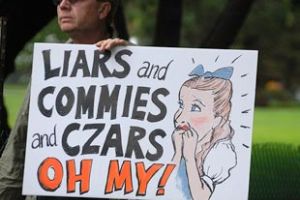 On Tuesday, tea partiers and other activists who came to Capitol Hill to protest the health care bill were armed with the usual array of signs demanding that Congress “Kill the Bill,” comparing Obamacare to socialism and the usual rhetoric. But many of them were also toting a slick, hefty tome called, “Shattered Lives: 100 Victims of Government Health Care” that was being distributed at the rallies by the National Center for Public Policy Research. The report features an introduction by talk show host Mark Levin, the author of Liberty and Tyranny: A Conservative Manifesto, and is essentially a compilation of media health care horror stories–everywhere but in the U.S., which, of course, could provide tomes worth of material about the failures of the private health care system.

The “Shattered Lives” stories come from Great Britain, Japan, Russia and South Africa, and read together, they do offer up some pretty horrible details about national health care. There’s the British six-year-old whose brain tumor went undiagnosed for years because the National Health Service insisted in giving him painkillers for his headaches but not a brain scan. There’s one about the guy who ended up pulling his own tooth with a rusty pair of plyers because he couldn’t find a dentist.

It’s a gripping read, and the production values suggest that someone put up a big chunk of money to produce and distribute it to tea party activists far and wide. (Rally participants on Tuesday got free bound copies that cost $14.95 on Amazon.) There’s reason to be suspicious. After all, NCPPR isn’t just any public policy group. You might recall that not only has it done stealth research for tobacco companies, but it was also one of the nonprofit groups accused of helping the disgraced uber-lobbyist Jack Abramoff pimp his clients in exchange for big donations. The report doesn’t say who paid for the work, but it has all the hallmarks of the usual corporate suspects.