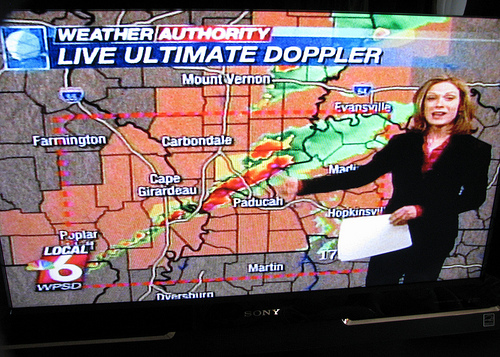 Why don’t TV weather forecasters believe in climate change? It’s an interesting question, raised recently in a fabulous Columbia Journalism Review piece by Charles Homans. A new study released yesterday by George Mason University’s Center for Climate Change Communication confirms that the portion of skeptical weathermen is sizable — which is frightening news, considering how many Americans rely on their local weatherman for information about global warming.

The study found that only 54 percent of the 571 television weathercasters surveyed think that global warming is happening, and only 31 percent believe that it is “caused mostly by human activities.” More than one quarter–27 percent–agreed with the statement “global warming is a scam.” The New York Times has a good summary of why this might be the case. While the American Meteorological Society affirms the scientific consensus on climate change, only about half of TV weathercasters actually have degrees in meteorology. And weathercasters, by profession, focus on short-term weather patterns and use sensitive models that are can’t predict weather more than a week in advance. Climatologists, on the other hand, focus on decades and centuries using more complex modeling. Homans’ piece evaluates these factors much more in depth.

But here’s the more concerning data from the new poll: the vast majority of the public relies on these men and women for their climate-related information. The poll notes that “the public has identified weathercasters as one of the sources they most trust for information about global warming.” Indeed, a separate study from George Mason and Yale found that 56 percent of Americans trust weather forecasters to give them information about global warming more than any other source. And in the latest poll, a full 94 percent of respondents said they “work at stations that do not have anyone else covering science or environmental issues full-time.” That means a lot of people are relying on weathercasters as a primary source of information.

But there were also positive results in the survey. Two-thirds of TV weathercasters said they “have an interest in reporting on climate change.” Over 90 percent said that they believe that additional resources could help them to a better job covering climate change – including access to climate scientists for on-camera interviews, peer-reviewed journals, and better graphics and animation for television. They also expressed interest in improving their coverage of the local effects of a changing climate, like increased precipitation and flooding, droughts, extreme weather events, and human health impacts of air quality concerns. It seems like there’s plenty of room for improvement on that front, and it could significantly improve public understanding as well.