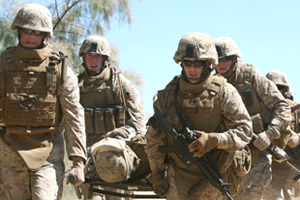 On a warm January day last year in Jacksonville, North Carolina, a 27–year–old Marine wearing sharp blues and sporting a telltale buzzcut walked unsteadily down a carpeted hallway, his eyes fixed on a sign taped to a door at the far end. A physical therapist guided him. A few steps from the door, he staggered and lost his balance, listing toward the wall to his left. With the help of the therapist, he righted himself and kept going.

Staff Sergeant David Marino was performing a humbling routine designed to counteract the effects of traumatic brain injury (TBI)—impaired balance, coordination, and memory—which he sustained in two roadside bombings in Iraq. Around 20 percent of soldiers who have served in Iraq and Afghanistan suffer from TBI, and while there’s no treatment to reverse the initial brain damage, some have shown improvement after physical and occupational therapy. Yet the uncertain recovery process is not the only challenge Marino faces. Despite his injuries, he’s chosen to remain a Marine—and discovered just how hard so-called “wounded warriors” have to fight to remain in the Corps.

Marino signed up for duty when he was 17. It was an instinctive choice—his father fought on Guadalcanal during World War II and his brother was also a Marine. “I didn’t want to go to college, ” he says. “I wanted to be a warrior. ” Between 2004 and 2006, he served two tours in Iraq, leading men on patrols, escort missions, and “hard–hits”—raids to capture suspected bomb makers and resistance fighters.

In 2004, he was caught in two IED explosions, both outside the city of Iskandariyah. “I just remember waking up on the ground, shrapnel all around us,” Marino recalls. “About two days afterward I started feeling better. But you just feel like, you know, sick inside, discombobulated or whatever. Headache. Ears ringing for a couple of days.” But it didn’t occur to him to seek treatment. “Back then, if you weren’t physically bleeding, you didn’t go to medical. We would just try to be hard as nails, take care of your brother,” he explains. “Because if you missed a patrol, you were making someone else fill your position.”

One January day in 2005, Marino and a friend, Sergeant Jayton Patterson, were driving to their patrol base when an unseen enemy fired rockets at their vehicles. Patterson got out of his truck to inspect a bomb crater. “He was standing on three IEDs— improvised explosive devices. And, you know, they blew it on him,” Marino recalls. “It’s the worst pain I’ve ever felt in my life…. My body made sounds and weeps and cries that a grown man shouldn’t make.”

On Marino’s next deployment, in early 2006, his unit wound up in Anbar province, then the most violent region of Iraq. Marino led a platoon of 40 Marines and several Iraqi soldiers on dozens of missions. He saved lives—and took some. Commanders referred to him as a “Marine’s Marine,” one of the highest compliments in the Corps.

But by the time Marino returned home, he had acute pain from a severely damaged knee and back and was in no condition to resume the grueling training cycle of a combat Marine. He was placed on limited duty and given a desk job while he underwent treatment.

Then, more problems surfaced. “I started forgetting phone calls,” Marino said. “Having a conversation and then five minutes later I have no idea what we’re talking about.” He’d get irritated at anyone who pointed out his lapses—his men, his wife—which was out of character for the normally even-tempered staff sergeant.

Marino’s superiors found him a less demanding job as an assistant to his unit’s “family readiness officer,” a stateside Marine who serves as a link between deployed troops and their families. Only then did the full extent of his injuries surface. “It was overwhelming—the PTSD, the memories. I started drinking a lot,” Marino said. “Thoughts of suicide…I finally came forward and told the doctor what was going on.”

Two years after he was hit in the IED blasts, Merino was finally diagnosed with traumatic brain injury. This explained his memory loss and behavioral changes—common symptoms of TBI. After that, said Marino, “they got me in at the Wounded Warrior Battalion.”

The Wounded Warrior program was founded by Lt. Colonel Timothy Maxwell, who was severely wounded in Iraq when an exploding mortar drove shrapnel into the left side of his brain. His injuries were grave, but he found the isolation from fellow Marines harder to bear. So in 2004 he created a support group for Marines who were too injured for regular duty, and he set up a barracks where they could heal together. In April 2007, this ad hoc assembly became the Wounded Warrior Regiment, with battalions at Camp Lejeune, North Carolina, and Camp Pendleton, California, a total of 4,420 soldiers, and a budget of $4.5 million.

But if a Marine wants to stay in the Corps, being assigned to a Wounded Warrior Battalion isn’t enough. The regiment only acts as a way station for injured troops about to leave the service or applying to remain in the Corps. As an expeditionary fighting force that deploys routinely and with little warning, the Marine Corps has limited use for the wounded. Its stated policy is to retain as many injured Marines as possible. In practice, the retention process is complex, onerous and glacially slow.

First, Marino needed to earn so-called “permanent limited duty” (PLD) status. To qualify, one must be declared unfit for regular duty by a medical board. According to the Corps’ policy, this required him to document that his injuries had been inflicted during hostile action, hadn’t resulted from misconduct or an accident, and met the criteria for the Purple Heart, a military honor awarded to soldiers wounded in action.

After that, Marino submitted a mandatory formal request to the commandant of the Marine Corps outlining his reasons for wanting to remain in the Corps. He provided the required medical evaluations and endorsements from his commanding officer and the commanding general in his chain of command. Finally, his file was forwarded to a review board for a decision.

In the spring of 2008, after roughly a year of paperwork, medical exams, and waiting—on top of physical therapy and psychological counseling—Marino was granted PLD status and allowed to stay in the Corps. He landed a job with the East Coast Wounded Warrior Battalion as a counselor, helping Marines navigate the bureaucracy he had just fought, and was later promoted to gunnery sergeant. He is now a career retention specialist for the West Coast battalion.

But not every Marine is so lucky. Only 50 Marines currently hold PLD status out of a uniformed force of 203,000, according to the Wounded Warrior Regiment’s strategic communications officer.

“Without effective assistance early in the process, the system is near impossible to navigate for anyone,” says Jason Perry, a military disability lawyer and former Army judge advocate who served as counsel to soldiers going before the Texas Physical Evaluation Board. Many Marines do eventually get some help—from an uncommonly good case manager in the military disability system, a service member who has navigated the process successfully, or civilian legal counsel—but it’s often too late to make a difference, says Perry.

There are other symbolic reminders that, first and foremost, the military is a fighting force for able-bodied men and women, one that makes precious little space for its wounded. In late June, Maxwell, the Wounded Warrior founder, ended his 22-year career in the Marines after deciding his injuries were too debilitating for him to serve any longer. “A year ago I went for surgery to pull out a piece of shrapnel near my brain stem,” Maxwell said at his retirement ceremony. “It crippled me on my right side. Marines are known for looking good in their uniform, and when I can’t look good in my cammies, it’s time to go.”