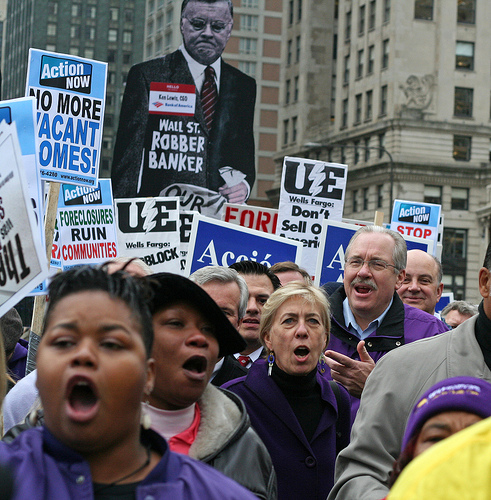 Fed up with the predatory practices and utter absence of foreclosure help from Wall Street, local politicians, unions, and citizens in Los Angeles have decided to battle the big banks and financial services community themselves in LA’s own version of “Move Your Money.” While Washington stumbles its way toward financial reform, a bill in the Los Angeles city government right now would crack down on banks and lenders who hang out to dry beleaguered homeowners and would rein in unfair practices; the bill would also create a series of policies calling for the divestment of LA’s funds now held by large banks to more consumer-friendly ones. The campaign, led in part by the union SEIU, will be voted on before LA’s city council as early as next Friday, an SEIU rep says, and marks a major effort in the “Move Your Money” campaign to yank both consumers and cities’ own dollars out of bailed out institutions that aren’t helping consumers, and into smaller, often local banks or credit unions.

A representative for SEIU today sent me the latest details of LA’s “Move Your Money” bill under discussion by an LA city government committee, which recently took the following actions:

SEIU is also trying to introduce similar legislation in Maryland, and hopes the city-wide “Move Your Money” campaign will catch on. It’s an ambitious effort, without a doubt, and while a few hundred depositors moving their money from, say, Citigroup to Weequahic Credit Union is more symbolic than anything, convincing a half-dozen cities to do the same could have a sizeable impact.