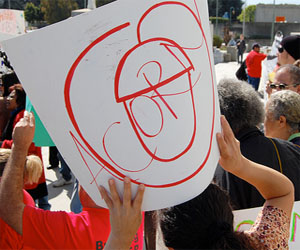 Conservatives can once again boast of their unqualified success as scapegoaters. Another of ACORN’s largest state chapters fell off the organization’s tree today, pulled down by the weight of debts, lackluster fundraising, and—of course—right-wing targeting. The left-leaning network of community organizations acknowledged that its New York syndicate has split off from the national headquarters and rebranded itself as New York Communities for Change. It’s a possible death-knell for community organizers—and a clarion call for Astroturf reactionary groups.

“This is what Fox has produced,” an unnamed source in the New York organization told Politico. “National Acorn and (CEO) Bertha Lewis are continuing doing their thing, but the New York flagship has been forced into this new organization.”

The move comes just a month after ACORN’s California offices jumped off a similar cliff. And ACORN’s national spokesman found himself playing defense, insisting that the organization wasn’t dissolving – at least, not “all across the country,” not yet.

That craziness, of course, reached its apex with the antics of failed plumber phone technician James O’Keefe, who made some money posing as a pimp and filming himself asking ACORN volunteers strange questions about the pimp business—which, it has been said, ain’t easy. O’Keefe’s stunt got traction in the media—and even the federal government—and played a disturbingly large part in today’s developments, even though Media Matters exposed his deceptive film-editing practices just last week.

Despite the inevitable conservative crowing to come—and the empowerment of the “anti-socialist” camp on the right—it’s important to note that not all Republicans have agreed with the anti-ACORN strategy; embattled moderate Florida Gov. Charlie Crist, who boldly broke ranks with his party again today over the stimulus, has derided ACORN’s critics thusly: “There are some who sort of enjoy chaos.”