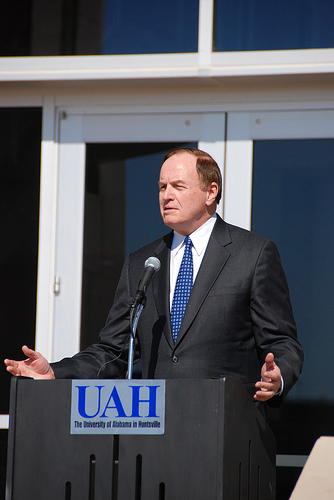 Sen. Richard Shelby (R-AL), whose financial-reform negotiations with Senate banking committee chair Chris Dodd (D-CT) broke down recently, is crafting a Republican version of financial reform with other GOP senators on the banking committee, Bloomberg reported today. The ranking member on the banking committee, Shelby had previously led financial-reform talks with Dodd, but those talks ended with an “impasse” between the two lawmakers. (Dodd has proceded with the talks with Sen. Bob Corker (R-TN) since the schism.) Some attributed the breakdown to Shelby’s opposition to a standalone Consumer Financial Protection Agency that would oversee financial products, like subprime mortgages, and would consolidate consumer protection in a single independent agency.

Shelby’s new, GOP-only reform efforts, Bloomberg reported, would create a consumer protection division within an existing bank regulator, not a standalone agency. Shelby aides also told Bloomberg that the senator’s version of financial reform would protect taxpayers from the cost of unwinding too-big-to-fail financial institutions. Also getting a look in Shelby’s financial reform would be a consolidated bank regulator, an idea that’s gaining steam in Dodd’s financial-reform plans as well. Aides to Shelby said a lot of the details have yet to be ironed out, but that talks had been ongoing for a couple of months now.