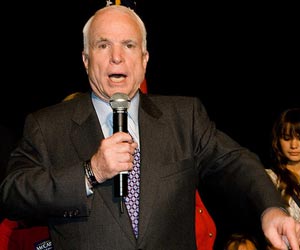 The Obama administration’s $54.5 billion plan to ignite the nuclear power industry might seem like the shot in the arm that nuclear advocates have been demanding for some time. But it’s apparently not good enough for John McCain.

One might think that McCain, who has long touted nuclear as the ideal low-carbon fuel source, would be enthused about Barack Obama’s State of the Union statement that creating clean energy jobs “means building a new generation of safe, clean nuclear power plants in this country.” But apparently not. McCain told The Hill:

During the campaign, I said, ‘Look, the only way we’re going to reduce greenhouse gas emissions and eliminate, over time, our dependency on foreign oil is nuclear power.’ I said it over and over and over again. So what did this administration just do? They say, ‘We’re for nuclear power, but we’re shutting down Yucca Mountain,’ in which we invested $16 billion. They keep saying, ‘Yes, we’re for nuclear power,’ but the rhetoric is contradicted by their actions. So I cannot engage in serious contemplation, serious discussion, until nuclear power is a viable option. It is not viable when you announce the only place you can store is closing, and they’re not recycling. So it’s a non-starter.

McCain must be living in an alternate universe if $54.5 billion in support for the industry does not live up to the administration’s rhetoric. And while the administration has decided to shut down Yucca, that was largely because it has long been clear that there was very little support for efforts to locate the waste facility there. The Department of Energy has formed a new commission to look at options for waste disposal and recycling, as there are a lot of questions about how exactly that can be done.