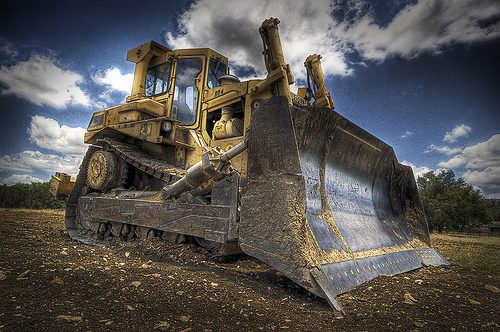 A bit of truly bizarre news from Foreclosureland.

Faced with foreclosure, Terry Hoskins, a struggling homeowner in Moscow, Ohio, decided to bulldoze his $350,000 home rather than let his bank, RiverHills Bank, take it from him. “When I see I owe $160,000 on a home valued at $350,000, and someone decides they want to take it—no, I wasn’t going to stand for that, so I took it down,” Hoskins told TV station WLWT in Ohio. The story goes on to say:

Hoskins said the Internal Revenue Service placed liens on his carpet store and commercial property on state Route 125 after his brother, a one-time business partner, sued him.

The bank claimed his home as collateral, Hoskins said, and went after both his residential and commercial properties.

The Moscow man used a bulldozer two weeks ago to level the home he’d built, and the sprawling country home is now rubble, buried under a coating of snow.

“As far as what the bank is going to get, I plan on giving them back what was on this hill exactly (as) it was,” Hoskins said. “I brought it out of the ground and I plan on putting it back in the ground.”