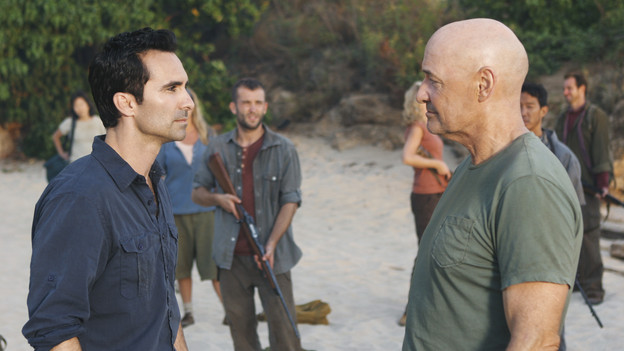 Last night, LOST kicked off its final season with a bang. Below, five Mother Jones staffers chat about Sayid’s resurrection, Hugo’s leadership abilities, Kate’s line-jumping, and what they hope the show’s enigmatic creators have in store for viewers.

Ben Buchwalter, Editorial Fellow: I’m in the chat room, reporting from 1974.
Nikki Gloudeman, New Media Fellow: Nice gchat entrance, Ben.
Jen Phillips, Assistant Editor: So what did you guys think? Did the first episode answer questions, or just frustrate you?
Nikki: I think they wanted to let fans know that they are going to give answers, by doing things like answering the smoke monster question right off the bat.
Ben: Yeah, this is a much better role for the actor formerly known as Locke.
Jen: I couldn’t take any more of Locke feeling sorry for himself. Terry O’Quinn makes an excellent badass. And he’s still got his knife!

Nikki: Favorite scene of the show? Mine was Jack and Locke rehashing their philosophical debate in the airport waiting room.
Ben: Hugo taking control and being a prophet.
Jen: Kate trying to steal a cab from Frogurt.

Jen: What do you think about Aaron? If he’s raised by someone else, will it mess things up? The psychic said Claire had to raise Aaron.
Nikki: Yes, he couldn’t be raised by “another” (or “an other”?) but why?!
Samantha Schaberg, Administrative Assistant: Isn’t Aaron the only child to be born on the island?
Nikki: What’s up with Aaron? Is he infant Jacob? He kinda looks like it. That’s my ridiculous theory of the chat!

Laurin Asdal, Director of Development: You know, my theory is, and this may be obvious, but when Juliet was dying and said “it worked,” I’m convinced everyone on the island will die and then they will assume their “plane didn’t crash” identities. That’s why they are telling parallel story lines.
Jen: Really? But why was Desmond on the plane? Because he never sailed to the island?
Laurin: That I can’t figure out. But he up and disappeared and he was the only person Jack recognized.
Nikki: Yes, actually there were a few key differences between what happened in the first episode [of the series] and the revised version [last night], which suggests the past before the parallel plane version is also different.
Jen: But even in new, non-crash timeline, characters are still meeting. Jack may help John, maybe Kate will still help birth Aaron…
Sam: Yes, they make the same choices.
Nikki: Will they actually make the same choices or will their subconscious knowledge of what happened on the island allow them to find redemption?
Laurin: They are destined to meet one way or the other. Hurley is totally Sawyer’s new mark.
Ben: Well, we know that the island doesn’t exist in this new timeline. But we also know that Jacob also probably exists, so maybe he’s bringing them together.

Sam: Are we sure that Jacob is the good in this?
Laurin: Well, he wears white linen.
Jen: And he weaves tapestries.
Ben: Seems like Jacob is good so far… which probably means he’s not. So is there a chance that Jacob and the man in black have a rivalry even without the island, and that Jacob is bringing everyone together in this parallel world?
Nikki: Oh that’d be interesting… so they exist in the world where the island is submerged too.
Laurin: They showed the man in black being angry with Jacob for allowing new visitors to the island.
Ben: The man in black constantly refers to setting people free by killing Jacob.
Jen: Right, so now that Jacob’s dead, it means we can all go on our merry ways, right? 😉
Sam: Jacob seems to still have that influence from the other side, he sent Hugo to the temple where Sayid was brought back to life.
Ben: Yeah was anyone surprised when Sayid came back to life?
Laurin: Not when multiple people can communicate with folks in the afterlife. What a handy talent. What do you think the substance is that protects people from the smoke monster? I found that hilarious.
Sam: Yes, I want to know what that is too, ashes of what?
Jen: Whatever they burned to make the ashes, it was big…
Nikki: It seems to be the same substance surrounding the scary cabin where Jacob resided. Some sort of ash to keep out—or in—non-corporeal entities. It would explain why the presence was trapped in the cabin, begging for help.
Laurin: Losties all, I wish I could continue but have a meeting. Too much good stuff. Cannot wait until next week! I love chatting with LOST fans. Dorking out is my favorite hobby!
Jen: Gah, okay one last one, what do you think of “the Others” now that you’ve seen them living in the temple?
Nikki: I keep thinking about what they kept saying a few seasons ago, “We’re the good guys.”
Sam: That’s my whole thing, I think everything we’ve been led to think is bad will be actually good.
Nikki: They seem to have some ancient power to keep watch over humanity, but they seem a little cranky to me.
Jen: Cranky and powerful. Sounds like the God of the Old Testament. Any last last thoughts before we end?
Ben: Sawyer: B-) man in black: x-( Locke: 🙁 Jack: 😐 Kate: :'(
Nikki: excellent! Maybe LOST is just based on emoticons. We’ve cracked the code! And with that, goodbye my fellow Losties. Until next week…namaste.