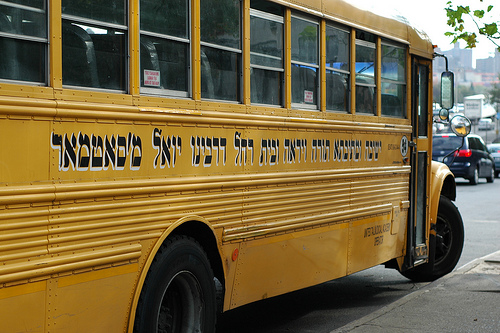 People’s Exhibit A: Brooklyn’s Hebrew Language Academy in Kings Highway (an neighborhood which is in many parts profoundly Jewish, though not particularly Orthodox). I visited founders of the HLA during the firestorm of controversy that surrounded its opening. Give ’em an inch and they’ll be learning Gemara before you can say shalosh, cried the critics. Only Jewish parents want it, groused the Times. It’ll be a yeshiva in public school’s clothing, screamed the Post. (To be fair, HLA did end up in an old yeshiva building—but go ahead and ask me how many HeadStart preschool programs are also housed in old yeshivas in Marine Park, Kings Highway and Brighton Beach and nobody bats an eyelash—go ahead, ask me).

Didn’t happen. Nothing of the kind. Today, less than 9 months into its inaugural year, the charter couldn’t make headlines if it tried. Why? You mean besides that it’s integrated and successfully meets educational benchmarks? Other than that?

First of all, the Jews (and there are Jews) in Marine Park and Kings Highway are almost universally Soviet, and nearly all immigrants.  I know because I hung out there all the time and I talked to parents who hoped to enroll their kids in the school. If they’d wanted their kids to get a religious Jewish education, the same people who helped them immigrate would have lined up around the block to fund their way through yeshiva. But they wanted their kids to get an American education, and to have another (for most it was their third) language. If more American parents wanted that for their children, we’d be in better shape as a country.

Secondly, the idea of Israeli cultural hegemony in Brooklyn is dumb. There are few Israelis in Kings Highway, and a statistically insignificant number in Brooklyn when compared with all the other Jews that live there. There are Hasidic sects in Brooklyn that exist nowhere else on earth. True, swaths of the borough are devoutly Orthodox and Hasidic (South Williamsburg; half of Midwood and Crown Heights, respectively; most of Flatbush; Gravesend; and all of Boro Park), but those folks seem to have dealt with schooling in their communities already. Not only are there dozens of different private Jewish schools in Brooklyn, there’s dozens of different kinds of private Jewish schools to support different levels of observance and different sects. The idea that the Satmar Hasidim in neighboring Boro Park would dump their children in a public charter school just because it happened to speak Hebrew is so ignorant it’s borderline anti-Semitic.

The Los Angeles case is laughably similar in its assumptions, but importantly different in context. Unlike Brooklyn, Los Angeles has an ENORMOUS Israeli population—if you live in Santa Clarita, the charter’s proposed location (just north of the San Fernando Valley, home to the largest Israeli population in the country), Hebrew’s actually a job skill. If anything, non-Jewish parents in Los Angeles are more likely to want their kids in a Hebrew-language charter school, since they might actually have heard Hebrew spoken in the street (Lord knows I can’t escape it there).

Though LA’s a religiously Jewish place in general, it’s far less religious than Brooklyn. Still, the city has dozens of Jewish schools, and parents who want their kids to have a religious education will have no trouble getting them one without a charter.

All of which is beside the point, which is this: we’ve heard this argument before, and it’s been roundly disproved. If Brooklyn’s HLA proves anything, it’s that a Hebrew-language charter is just like any other charter school, vulnerable to the same failings. Los Angeles is already the capital of that–so what’s one more?