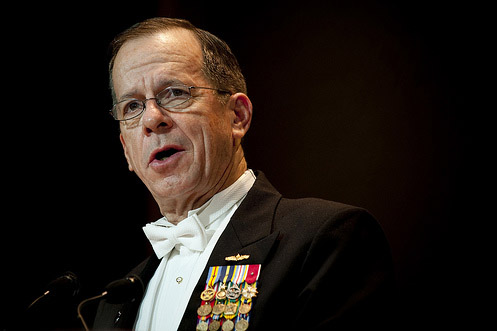 Some of Obama’s top Defense officials delivered testimony before the Senate Armed Services Committee today, weighing in on the ever-weighty issue of whether or not homos should be allowed to serve in the US military. To no one’s surprise, the issue left the GOP digging their heels in against change, and Democrats generally supporting the idea of ditching “Don’t Ask, Don’t Tell.”

Senator John McCain started things off on a grumpy note, offering up anecdotal evidence that “numerous military leaders” have told him DADT works. Defense Secretary Gates then read a prepared statement, saying that the question “is not when, but how” the repeal of DADT will occur. Gates said that he’s establishing a panel to study the issue, and that the study will take a year or more to complete.

Admiral Michael Mullen, the most senior uniformed figure in the US military, maintained that getting rid of DADT was the right thing to do, saying, “I cannot escape being troubled in the fact that we have in place a policy that forces young men and women to lie about who they are in order to defend their fellow citizens. For me, personally, it comes down to integrity.”

McCain loved that, of course, and replied with a demand that Mullen report back with the opinions of other chiefs of staff. Senator Udall (D-Colo.) chimed in, adding: “I think it was a fine senator from Arizona, Barry Goldwater, who used to say ‘You don’t have to be straight to shoot straight.'” Zing! (McCain faces a tough primary battle for his Senate seat in Arizona right now.) Another catty moment, described in Spencer Ackerman’s piece at the Washington Independent:

Some suggested that Mullen was carrying Obama’s water instead of presenting his own advice. “If it was a trial, perhaps we’d raise the undue-command-influence defense,” said Sen. Jeff Sessions (R-Ala.).

That drew Mullen’s ire. “I have served with homosexuals since 1968,” the chairman said, raising his voice. “Everyone in the military has… A number of things, cumulatively, for me, got me to this position.”

Well said, highly decorated Admiral who has served with homosexuals for more than four decades. We’re all looking forward to an entire year of this sort of back and forth as the Defense Department studies whether or not it’s prudent to let homosexuals serve—openly—in the armed services.