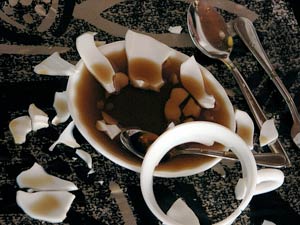 Texas gubernatorial candidate Debra Medina, a state-sovereignty advocate, may have expected her interview today on Glenn Beck’s radio program to be a big break. Instead she put on a show that at the very least should make Sarah Palin feel a better about her disastrous Katie Couric interview. Medina plodded along for a few minutes—perhaps a little too eagerly—until Beck asked whether she was was a 9/11 Truther. And that’s when Medina’s campaign blew up like a frozen can of Cola:

Beck: Do you believe the government was in any way involved with the bringing down of the World Trade Centers on 9/11?

Finally, Beck cut her off, saying, “Debra, you’ve answered the question.” Then he ended the interview and poured on the mockery:

“I…. [makes crashing sound] while I don’t endorse anyone, I think I can write her off the list! [Laughs.] Let me take another look at Kay Bailey Hutchison if I have to! [More laughter.] Rick [Perry], I think you and I could French kiss right now!…. WOW! WOW! The fastest way back to 4%! [Yet more laughter.] Phoo! Ho-ly Cow!”

You can listen to the interview here.

Medina almost immediately put out a statement asserting that “Muslim Terrorists” were responsible for 9/11, but it might be too late for her. An un-dorsement from Beck isn’t likely to bolster her fundraising or win over undecideds—two things she sorely needed to do to have a chance on March 2. As Texas Monthly‘s Eileen Smith spun it, “If you can make Glenn Beck look like a perfectly rational human being, you need serious help.”