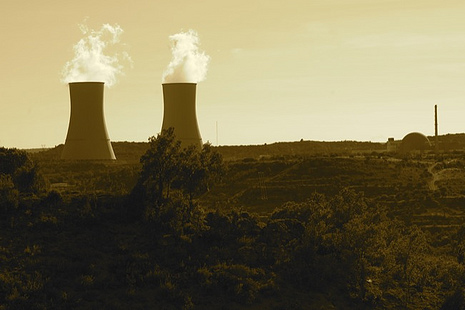 When President Obama voiced strong support for nuclear energy at his State of the Union address last week, both sides of the aisle jumped to their feet in applause. Nuclear subsidies have become a political necessity in Congress, despite the fact that nuclear energy is dirty, dangerous, and not really renewable. And due in large part to the nuclear industry’s lobbying strength in Washington, democrats have drawn criticism for favoring cleaner options like wind power in lieu of nuclear. Sen. Lamar Alexander of Tennessee, for one, criticized the president’s initial plan as “a national windmill policy instead of a national energy policy, which is the military equivalent of going to war in sailboats.”

Nuclear enthusiasts are no doubt pleased by the administration’s announcement today that it intends to triple the amount of nuclear loan guarantees for new nuclear plants to $54 billion. “It’s important to have a higher bar than what we have been working with, just $18.5 billion,” John Keeley, a spokesperson for the Nuclear Energy Institute, told me. “Put it in the context of where we need to go as a culture. You can’t get there with the volume the government has underwritten so far.”

USA Today‘s Green House blog reports today that a cohort of environmental groups, energy scientists, and small-government conservatives have mobilized to oppose nuke pushers like Alexander and Keeley. One letter to Obama, penned by taxpayer advocacy and nuclear non-proliferation groups, warns that “With hundreds of billions in bailouts already on the shoulders of U.S. taxpayers, the country cannot afford to move forward with a program that could easily become the black hole for hundreds of billions more.”

David Kreutzer, an energy economic and climate change analyst for the conservative Heritage Foundation wrote in a blog post for the National Journal that increasing the loan guarantees “is a bad idea for taxpayers, consumers and long-term industry competitiveness” because it would “stifle competition and technological development within the nuclear energy industry.”

And in a particularly damning blow to nuclear interests, Dr. Mark Cooper, an energy and environment economist at Vermont Law School wrote a report (pdf) last summer predicting that the cost of 100 new reactors could cost up to $4.1 trillion and that a combination of increased energy efficiency and cleaner renewable energy options would produce the same level of electricity.

So despite what you might hear in the halls of Congress or NEI headquarters, increasing federal loan guarantees for nuclear projects is dangerous environmentally, politically, and economically. But for the foreseeable future, the nuclear juggernaut seems poised to force it’s way through Congress with the full throated support of President Obama.