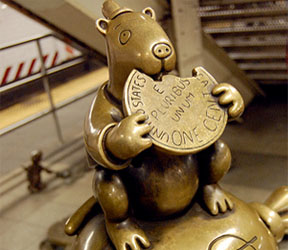 If Republican state Rep. Mike Pitts has his way in South Carolina, your money will be no good there. Or probably anywhere else. Pitts is taking anti-Obama fervor to its illogical extreme with a proposed law that would ban anyone in the state from accepting US Federal Reserve notes as legal tender. In place of the Benjamins, Pitts would have his fellow citizens trade only in gold or silver coins. Which should thrill Glenn Beck’s remaining advertisers, at least.

“The Germans felt their system wouldn’t collapse, but it took a wheelbarrow of money to buy a loaf of bread in the 1930s,” Pitts told CBSNews.com. “The Soviet Union didn’t think their system would collapse, but it did. Ours is capable of collapsing also,” he added, apparently unaware that unilaterally banning the federal currency would be a pretty quick way to collapse the savings of all South Carolinians.

It’s not clear how closely connected Pitts is to any Tea Party groups, but he’s certainly doing their bidding, and not just in advocating a gold (and silver) standard.

One group of “freedom-loving patriots” in Anderson, South Carolina, is praising the legislator for proposing an “excellent collection” of laws intended to eviscerate what it calls “the tyranny of the federal government.” In addition to the currency legislation, he’s sponsoring bills to bar “the United States Congress and all federal agencies” from ever requiring state residents to register firearms; to prevent Washington from ever forming something called a “North American Union” with Canada and Mexico; to keep Social Security numbers from being entered on government forms; and to form a state committee that could remove either of South Carolina’s US senators for voting in ways the committee deems “unconstitutional.”

That last proviso seems especially ironic, since it’s not clear how Pitts’ proposals are “pro-Constitution” when each one of them amounts to stick-roasting the nation’s charter document over a flaming can of Sterno. The currency bill, for example, “violates a perfectly legal and constitutional federal law, enacted pursuant to the commerce clause of the US Constitution, that Federal Reserve notes are legal tender for all debts public and private,” an unnamed legal expert told the South Carolina blog that broke news of the bill. The expert added: “We settled this debate in the early 1800s.”

Ah. But did we? Pitts’ stunt is part of a broad resurgence in anti-Union, secessionist chatter among conservatives. Secessionism is serious and historic business in South Carolina: This is the state that gave us America’s first guerrilla leader, the Civil War’s first gunshots, and that supreme of Tea Partiers’ symbols, the Gadsden Flag. But it’s also the state that gave us Mark Sanford, his school-lunch-hating lieutenant governor, and a lower recent percentage of high school graduates than 40 other states. All of which suggests that full South Carolinian sovereignty may not be the best-laid of political plans.