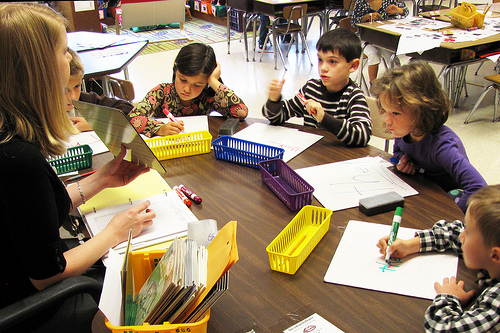 Arithmetic-phobic female teachers may be schooling your young daughter to think she is not as good at math as her male classmates, according to research published by the Proceedings of the National Academy of Sciences this week. The study examines levels of math anxiety in a very small sample size of fewer than 20 first-and second-grade teachers in a large, urban, Midwestern school district. It found that in classes taught by math-anxious female instructors—teachers who had mastered mathematical concepts in class but still performed poorly on exams—girls had lower levels of math achievement than boys.

The University of Chicago researchers who authored the study hypothesize that girls are more affected by math-anxious female teachers than boys because girls see their teachers’ behaviors as typical of the female gender and model them accordingly. So does a study of so few teachers say anything about trends among the country’s hundreds of thousands of public school educators? Maybe not. After all, the ‘math is hard, lets go shopping’ idea has been floating around for a long time—teachers are not the only ones signaling to little girls that they are not supposed to be good at math. Barbie does, er, did.

But if a simialr study with a larger, statistically significant sample size turned up the same results, it might warrant some concern. The math requirements to pursue a degree in elementary education stop at a candidate’s mastery of algebra and geometry, so the field can attract teaching hopefuls who think they can’t cut it in the higher level math courses required to teach middle or high school. And according to this study, that math apathy is trickling down to students who are so young, they can’t yet spell algebra. At a time when the country needs a boost in its STEM (science, technology, engineering, math) job force, it can’t afford for even a small number of little girls to leave their math ambitions in primary school.