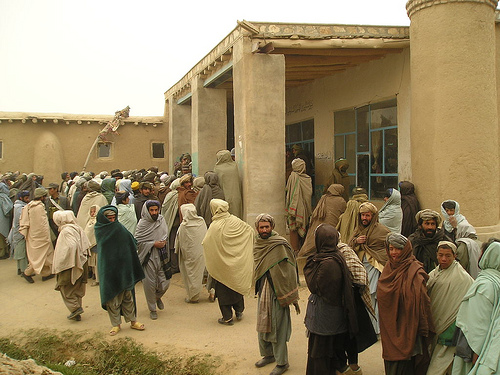 In the Western media, the views of Afghanistan’s political leaders and news of their latest political debacles—President Hamid Karzai’s standoff with the Parliament over his 24 cabinet nominations the most recent example—tend to dominate over all else; few and far between are the perspectives of those at the opposite end of the power structure, the Afghan citizens.

Which is why the Kabul-based Asia Foundation’s most recent “Afghanistan in 2009” report [PDF] released yesterday, based on a poll of more than 6,400 Afghan people from all over the country, is so valuable, offering a fascinating and useful snapshot of the Afghans’ views as the latest conflict in their war-torn country escalates. The poll’s subjects range from war and gay rights to security and the economy. If I had to choose the single most encouraging subject that emerges from the poll, it would be the growing support for women’s rights in Afghanistan. 28 percent said women should be able to work outside their home (up from 2 percent in 2006), even though Taliban forbid this, and in general, 67 percent of respondents think women should be allowed to work. 87 percent of respondents also said educational opportunities should be open to both sexes.

The poll also highlights the increasing availability of better technology in Afghanistan, as 2009 was the first year a majority (52 percent) of Afghans now have access to mobile phones and a year in which more people get their information from television as opposed to radio. Some other statistics from the report include:

Democracy: While support for women’s rights increased, the number of respondents who say “democracy is the best form of government available” decreased, from 84 percent in 2006 to 78 percent in 2009.

Freedom of speech: 40 percent said most people feel free to voice their opinions but 39 percent disagreed, saying they do not. When it comes to criticizing the government, the percentage of respondents who say doing so is unacceptable continues to drop, from 69 percent in 2007 to 61 percent in 2009.

Elections: These were taken before the flawed August election, and it’s very likely that some of the 64 percent who said that the presidential elections would be free and fair might take back their response. Some citizens rightly predicted what would unfold in the election, predicting cheating in the vote count (39 percent said so) and buying of votes (33 percent) as potential types of fraud.