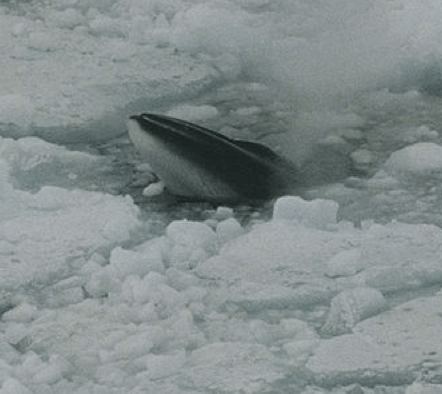 A genetic analysis of Antarctic minke whales reveals these small baleen whales are not more populous now as a result of the intensive hunting of larger whales last century. The findings run counter to the belief of commercial whalers that the world is overrun with minke whales who need culling.

Miraculously, Antarctic minkes weren’t decimated along with the other baleen and toothed whales in the 20th century. Blue whales were reduced to  1-2 percent of their previous numbers. Fin whales to 2-3 percent. Humpbacks to less than 5 percent.

Consequently, the “Krill Surplus Hypothesis” postulates that the two million whales who were killed in the Southern Ocean left behind a surplus of krill and a shortfall of predators. This supposedly paved the way for minke numbers to explode.

Except they didn’t. The researchers analyzed genomic DNA from 52 samples of minke whale meat purchased in Japanese markets. The whales were killed during commercial whaling thinly disguised as “scientific whaling.” The findings in Molecular Ecology:

“Some scientists involved in the International Whaling Commission have suggested that Antarctic minke whales have increased three-fold to eight-fold over the last century because of the lack of competition for krill. But until now, there has been little evidence to help judge what historic populations of minke whales actually were. Our study clearly shows that minke whales today have a great deal of genetic diversity, which reflects a long history of large and relatively stable population size. This genomic approach is a significant advance over most previous studies, which have examined diversity using only a handful of genetic markers.”

No one eats whale meat anymore. The Japanese feed it to their dogs. No excuses left.