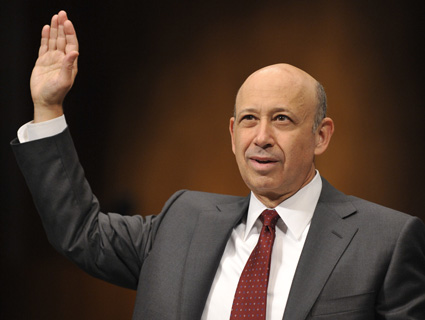 After Goldman Sachs, JPMorgan Chase, and Morgan Stanley announced hefty profits last fall, the Obama administration’s pay czar said that he’d cap pay at Citigroup, Bank of America, and five other bailed-out companies. The move was largely symbolic: It capped salaries for only 25 executives, kept big stock bonuses in place, and did nothing to address the culture of rewarding folks who sowed our economic destruction. Below, some of the players who made out like bandits during the bubble and the bailout. 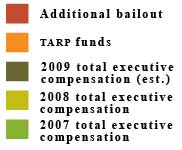 QUOTE: Before the crash: “It is hard for us…to even see a scenario within any kind of realm of reason that would see us losing $1 in any of those transactions.”

CLAIM TO FAME: Ordered a $50 million private jet, announced huge layoffs, and jacked up credit card APRs—after getting bailed out

QUOTE: Told Congress last February, “My salary should be $1 per year with no bonus.” Didn’t mention that he took $1.6 million in stock options as Citi lost $18.7 billion in 2008.

CLAIM TO FAME: As Clinton’s treasury secretary, he pushed to overturn regulations prohibiting finance-bank hybrids such as…Citigroup. QUOTE: Wishes he could have reined in Citi but “I don’t know what I could have done” as just a board member.

CLAIM TO FAME: Okayed $3.6 billion of Merrill Lynch bonuses when buying the troubled firm. Said he’d return $1 million in past earnings, but still gets a $53 million pension.

QUOTE: He’s against regulating “the banks that caused this mess” because they’d been “held accountable by the toughest, most unforgiving master of all: the free market.”

CLAIM TO FAME: Cutting comments (“That’s the dumbest thing I’ve ever heard!”) and cutting perks (“You’re a businessman. Pay for your own Wall Street Journal.”)

QUOTE: Over lunch at the Four Seasons: “Corporations can waste a tremendous amount of money. It’s destructive. It’s wrong.”

CLAIM TO FAME: Oversaw Goldman’s risky bets on the housing bubble, then turned the investment firm into a bank so it could get TARP money

QUOTE: Says the financial industry looks “self-serving and greedy in hindsight” but that he’s been “doing God’s work.”

CLAIM TO FAME: Made a tidy $12.6 million in first six months on the job

QUOTE: Asked before Congress about his 2007 pay, he conceded that he’d gotten $67 million in stock—but “at the values that pertained in 2007, which wouldn’t look familiar to you now.”

CLAIM TO FAME: Earned the sobriquet Mack the Knife by slashing jobs. His battle cry: “There’s blood in the water; let’s go kill!”

QUOTE: Told Congress, “If you gave me no bonus in the best year, I would still be here,” but later griped that smaller post-bust bonuses led to “an exodus of key people.”

CLAIM TO FAME: Asked for a $10 million-plus bonus as Merrill lost $27.6 billion in 2008. Then redid his office for $1.2 million and approved bonuses all around. As the firm’s hidden debts nearly scuttled its sale to B of A, he headed to Vail.

QUOTE: Bonuses were “the right thing to do for…the reward of the people who were performing.”

This chart is part of Mother Jones’ coverage of the financial crisis, one year later.

What Else Could 14 Trillion Buy?

The Real Size of the Bailout

We’re paying WHOM to Fix Mortgages?

How Banks Got Too Big To Fail

The Bankers On Obama’s Team