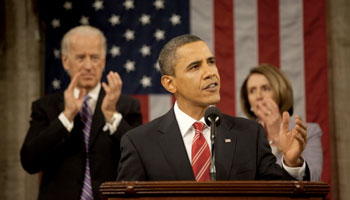 In the days after the Democratic defeat in Massachusetts, President Barack Obama held a town hall meeting, delivered a weekly address, and sent out a Twitter message repeating over and over that he has been “fighting” for the middle class. In his first State of the Union address, he used that word once.

When Obama appeared before the members of the House and Senate on Capitol Hill, he once again played it cool. There was not much that was visceral in his speech—or overly confrontational. It was as if he was aiming for a reset after what he termed “a difficult year.” He urged listeners, “Let’s seize this moment—to start anew.” He buried his appeal for closure on health care reform, saying nothing about what Congress should do to pass a final bill. The president offered far more details to describe his efforts to curb government spending.

Yet the speech seemed designed not to convince recalcitrant Republicans to provide Obama a Kumbaya-like do-over—White House strategists are not naive—but to prompt independent voters to reconsider the president. At the start of the speech, he defended the bank bailout, maintaining it was necessary to avoid a second depression, but that “we all hated it.” He declared that he understood that Americans who have been clobbered by the economic consequences of the Wall Street-caused economic collapse are frustrated and angry and cannot fathom why Wall Street has been “rewarded” and why they are left to struggle.

In other words, I feel your pain. But Obama went short on feeling the anger. He did talk up his proposal to tax the big banks to recover part of the costs of the bailout. He also proposed using $30 billion paid back by Big Finance firms to underwrite community bank lending to small businesses. (GOPers in the audience didn’t applaud for that.) Obama cited the tax cuts for working families and small businesses he has enacted and noted that the stimulus bill had helped save jobs and averted “disaster.” But the main theme was simple: jobs, jobs, and jobs.

Commentators will debate whether Obama hit the sweet spot on that front. He called for Congress to deliver a jobs bill without delay—but he didn’t state exactly what he wants in it. He hailed his administration’s programs and tax breaks for small businesses. Decent programs, perhaps, but nothing too grand. He then moved on to champion high-speed rail and clean-energy jobs. “People are out of work,” he said. “They are hurting. They need our help.” He highlighted Vice President Joe Biden’s Task Force on Middle Class Families and his administration’s move to expand the child care tax credit. Will all this resonate with those who are hurting or worried about hurting? Obama certainly came across as deeply concerned. But did he persuade voters he’s going to make a difference?

The president tried to tie his jobs fixation to his grand vision, calling for American innovation and investments in clean energy and education. “The nation that leads the clean energy economy will be the nation that leads the global economy,” he said.  But it wasn’t until he was more than half-way into the 75-minute-long speech that Obama hit the most-anticipated section: heath care reform.

He pitched this initiative as he has done so before: protecting Americans from “the worst practices of the insurance industry,” giving small businesses and uninsured Americans a chance to obtain affordable coverage, lowering the deficit by $1 trillion in the next 20 years. But he added, “I take my share of the blame for not explaining it more clearly to the American people.” And he added that he realized that “all the lobbying and horse-trading” had “left most Americans wondering what’s in it for them.”

This was a significant presidential mea culpa. But Obama had little to add other than to ask “everyone to take another look at the plan we’ve proposed.” And he pleaded, “Let us find a way to come together and finish the job for the American people.” This was not a call to arms. Nor did he provide much guidance to his fellow Democrats, who have been struggling to complete that job, or to citizens who look at the inside-the-Beltway process and cannot sort it out.

Here was an opportunity for Obama to show himself a fighter, by confronting GOPers and the insurance lobbyists more forcefully, depicting the health care debate as a face-off with two sides, and encouraging Americans to enter the fray, presumably on his side. Yet he made no explicit pitch for citizen pressure on Congress. (What about the Obama Nation army of 13 million people? He wasn’t talking to them.)

Throughout the speech, Obama didn’t flash much political muscle. He was selling reason—and presenting himself as a reasonable man. But that may not be enough to overcome the entrenched political opposition. At one point, he said, “I am not interested in punishing the banks.” No doubt some listeners wondered, why not? He did decry lobbyists who want to kill financial reform. But he didn’t call them out by name or say how they should be beaten back. When it came to Washington, he noted the system was broken:

We face a deficit of trust—deep and corrosive doubts about how Washington works that have been growing for years. To close that credibility gap we must take action on both ends of Pennsylvania Avenue to end the outsized influence of lobbyists; to do our work openly; and to give our people the government they deserve.

But this seemed a bit abstract. Obama did propose reforms: forcing lobbyists to disclose their individual contacts with members of Congress or officials in the executive branch, and limiting their contributions to candidates. He called for Congress to pass legislation addressing the recent Supreme Court decision that allows for unlimited special interest spending on elections. (“I don’t think American elections should be bankrolled by America’s most powerful interests, or worse, by foreign entities,” he said.) But there was something bloodless in his presentation.

After all, Obama spent nearly two years campaigning for “change” in Washington. Now if the money-drenched ways of the nation’s capital are preventing him from delivering to the American people the help they need, perhaps he should be more ticked off. Moreover, the only way he is going to bring about fundamental change on this front is by declaring war on the special interests and rallying popular support for the crusade.

But Obama the Candidate also promised to transcend partisan bickering and unite the warring camps of the capital. And in this State of the Union speech, he criticized the petty politics of DC: “What frustrates the American people is a Washington where every day is Election Day.” He criticized the GOP’s abuse of the filibuster and other procedures—but without slamming the Republicans directly: “Neither party should delay or obstruct every single bill just because they can.” This was no major calling out of the GOPers. It’s as if Obama is caught in a corner of his own making. He says business-as-usual partisan sniping is blocking the people’s business. But if he spells this out and blasts the Republicans for their obstructionism, he will be seen as contributing to the partisanship he bemoans. “I will not give up on changing the tone of our politics,” Obama declared. But tone is not results.

The long speech had plenty of different hooks to analyze. Obama tried to rope in independent voters with an emphasis on deficit reduction. He didn’t go hog-wild on health care. He took a few swings at Wall Street and lobbyists, without looking too radical. He did note he would let tax cuts for oil companies, hedge fund managers and people making over $250,000 a year expire. He called for climate change legislation—barely—but plugged “clean” nuclear energy and offshore drilling. He promised to work with the Pentagon and Congress to end the Don’t Ask/Don’t Tell policy. There was a glancing reference to immigration reform. He didn’t spend much time re-justifying his decision to expand the Afghanistan war. He blasted TV pundits for reducing “serious debates into silly arguments and big issues into sound bites.”

A voter, a member of Congress, even a TV pundit—anyone could zero in on whatever moved him or her. But Obama, who noted that his administration “has had some political setbacks this year,” didn’t seem to be reaching for much more than a simple message: Take a second look at what I had to work with, what I’ve done, and what I want to do—for you. The question is, are there second looks in American politics today?