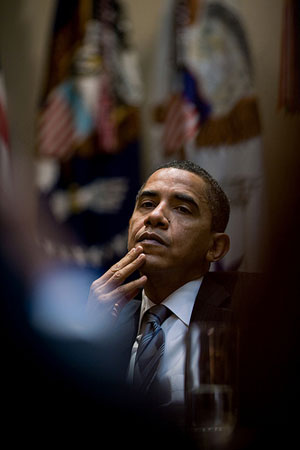 White House photo/Pete Souza (Government Work).President Barack Obama will campaign in Massachusetts on Sunday in a last-ditch effort to save Martha Coakley, the Democratic candidate to replace Ted Kennedy in the Senate. The stakes couldn’t be higher. If Scott Brown wins, health care reform is probably dead. The media will take the loss—in Massachusetts, of all places—as further evidence that the party is in huge trouble in the November midterms. Congressional Democrats could face a wave of retirements as vulnerable Democrats pass on tough reelection fights. Sure, if Obama goes in and Coakley still loses—a definite possibility—it will be painted as a major defeat for the president. But since the White House’s agenda is finished anyway if Brown wins, the Obama team probably figured they have nothing to lose.

Needless to say, it would be truly crushing for Democrats to come so close to the goal they’ve been pushing towards for 60 years and fall short. Base enthusiasm would fall even further. The president’s agenda would be permanently stalled by a rock-solid GOP filibuster in the Senate. The party might not recover for years. (It’s ridiculous, of course, that a bill with 59 votes in the Senate can’t pass. But that’s the system we have.)

The only bright spot for liberals in all this is that maybe, deep in the recesses of Obama’s brain, there is finally a twinkle of realization that he needs his base. As economist James Galbraith says in an email, “This could possibly be a watershed moment, when the President finally realizes that he has to have an army, if he wants to win the war.” We can hope that’s right. I’m a big believer in the importance of process and compromising to push things through a corrupt and dysfunctional Congress. But it’s incredibly important to get people energized and excited about politics—to have them hoping and wanting. That was the magic Obama brought to his campaign, and he’s definitely lost it in the White House. Can he get it back? Does he want to?