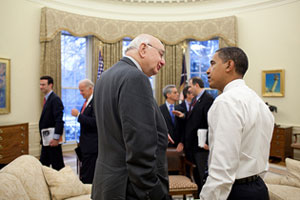 It took a year—of pathetic deference to the financial lobby, of siding with the Wall Street alums in his administration, of allowing special interests and their shills on the Hill to hollow out financial regulation legislation—but Obama’s finally seen the light. In the latest Wall Street-Washington news, the president’s aiming to hit banks where it hurts by clamping down on risky speculative trading, capping the size of major financial institutions, and stopping commercial banks from trading with their own cash. An encouraging sign, Obama’s latest move is just as much Paul Volcker’s, the former Fed chairman who until lately couldn’t get any of his ideas heard in Washington and had criticized Obama’s earlier proposals. Until recently, Volcker,  the chair of Obama’s Economic Recovery Advisory Board, was widely seen as less influential than more pro-Wall Street administration types like Treasury Secretary Tim Geithner and Larry Summers, the president’s chief economic adviser. But now Obama and Volcker appear to have teamed up, and while Wall Street will surely scream bloody murder here, I can’t help but feel excited that maybe, just maybe, Obama intends to quit bowing to big finance and work toward serious, lasting, productive financial reform.

Here’s why this announcement is so important. For starters, as Kevin has pointed out in his piece “Capital City” and in many blog posts, a lot of the fallout from the financial crisis (and others like it in the past, i.e., LTCM) came down to one word: leverage. Shops like Lehman Brothers were allowed to be ridiculously, insanely leveraged, their bets so far exceeding what they actually had on hand, that when a great deal of those bets failed the entire ship sank with it. That applied to a lot of institutions, some of whom would presumably be impacted by this plan, which, as it’s laid out now, would limit that risk-taking—and thus prevent future Lehmans and other catastrophes that would ripple throughout the economy.

The proposal also hits on one of Volcker’s causes celebre: prohibiting what’s called “proprietary trading,” when commercial banks make bets with their own money from, say, deposits. Until 1999, the Glass-Steagall Act maintained a firewall between commercial and investment banking, but once the act was eliminated banks began to bet again with their own cash on things like mortgage-backed securities. This latest proposal would again tamp down on that practice, given the role it caused in the run-up to financial meltdown.

With this latest proposal coming on top of the president’s support for a Consumer Financial Protection Agency and the bank tax, has the administration finally reversed course? Obama has done more to take on Wall Street in the past week than in the previous year. As Congress looks to take up financial regulation talks, are today’s moves a harbinger of what’s to come?