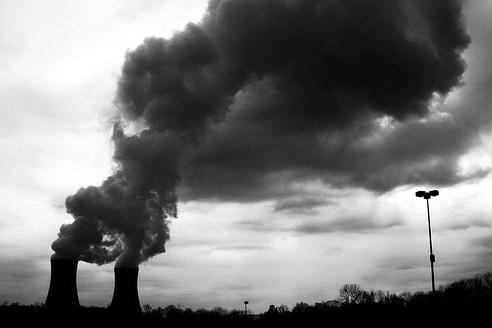 In his State of the Union address last night, President Obama praised nuclear energy as a promising renewable option to help solve the country’s energy crisis. But rising radioactive chemical levels at a nuclear plant in Vermont give us another reason to be queasy about the idea… as if we needed one.

In response to leaks of tritium (radioactive hydrogen) at nuclear plants in Illinois and New York, the Vermont Yankee plant began monitoring the harmful chemical in 2007. In recent weeks, tritium levels have spiked in water sources surrounding the plant, prompting Vermont lawmakers to question whether they should extend Vermont Yankee’s operating license, which expires in 2012. The New York Times reports:

Vermont’s governor, Jim Douglas, a longtime supporter of the plant, said on Wednesday in a statement that recent events had “raised dark clouds of doubt” about the reactor’s safety and management. He suggested that the Legislature put off any decisions on the future of the plant, located in the town of Vernon.

If the nuclear plant were to be denied an extension, it would be the first such move by the public or its representatives since 1989, when residents in Sacramento voted to close the Rancho Seco nuclear plant, owned by their municipal utility. No state legislature has ever voted to close one.

Despite the environmentally harmful waste and potential dangers associated with nuclear energy, applications to build new reactors have surged in the past three years. But as the need for increased renewable energy production expands, so does the perceived necessity of nuclear power. And nuclear lobbyists hope to capitalize on this trend by securing massive federal loan guarantees for new reactors from the Climate bill currently being debated in Congress.

But nuclear energy isn’t the homerun that the NEI and congressional politicians want you to think it is. And chemical mishaps like the tritium scare in Vermont should make Congress pause before it prioritizes the industry over cleaner, safer renewable options like wind and solar.