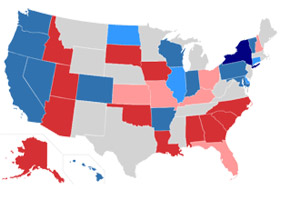 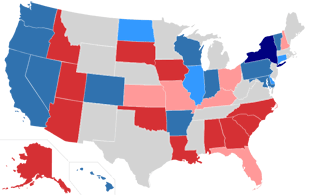 Imagine that nine months from now, all of your neighbors got to vote on whether you should keep your job. Even if you thought you would win that vote, it would definitely be on your mind—a lot.

That’s how members of Congress—especially Democrats—are feeling right now. In nine months, they could be out of a job. Fear is one reason that Dems are balking at the prospect of pushing through health care reform.

And the way the November elections are shaping up, it looks like Dems are right to be worried. The big election news today is that Beau Biden, Delaware’s attorney general (and the son of Vice President Joe Biden) won’t run for his Dad’s old Senate seat. That means Mike Castle will probably win the seat. Castle is a Republican member of the House who is the state’s most popular politician. Castle has been winning statewide elections in the First State since the Reagan era, and he’ll be a heavy favorite to win in November.

The other big election-related news for today is a Rasmussen poll out of Indiana that shows Rep. Mike Pence (R-Ind.) leading Evan Bayh, the incumbent Democratic Senator, by 3. The race is already on election expert Nate Silver‘s takeover radar, even though Pence hasn’t announced he will run.

Between the Bayh and Biden news, the Democrats look increasingly likely to risk losing control of the Senate. North Dakota, where Sen. Byron Dorgan is retiring, looks like a near-lock for GOP Governor John Hoeven. Delaware looks like a lock for Castle. Democratic incumbents are also in serious trouble in Nevada (Harry Reid), Arkansas (Blanche Lincoln), Pennsylvania (onetime GOPer Arlen Specter), and Colorado (appointed Sen. Michael Bennet). If Republicans can sweep those four races, win the two near-locks, pick up the open seat in Illinois (where popular Rep. Mark Kirk is running), beat Bayh in Indiana, and beat Barbara Boxer in California and get Joe Lieberman to switch allegiances, they’ll have control of the Senate. Right now, all of those tasks look achievable. But even in the best cycles, it’s hard to get everything to go your party’s way. Nate Silver puts the odds of the Republicans getting to 50-50 or beyond at a bit less than 15 percent. That seems about right. But unless the national environment changes, the Dems are definitely set to lose a bunch of seats—and we haven’t even talked about the House of Representatives yet.

So is there any hope for the Democrats and President Barack Obama’s agenda? Tom Jensen of PPP, a polling firm, thinks they might have a shot at salvaging a few seats if they run anti-establishment candidates in the open-seat races:

Right now voters are very much down on the political establishment. A Castle vs. Biden race would have been establishment vs. establishment. Democrats have an opportunity now to field a candidate who can run more credibly as an outsider against nine term Congressmen Castle than Biden could have…. Democrats will likely have to run someone now with less initial name recognition. But remember that Scott Brown’s name recognition was just about zero at this time two months ago. And Kay Hagan and Jeff Merkley were both pretty obscure before being elected to the Senate two years ago. Initial name id tends to be pretty overrated in statewide elections.

Brown, Hagan, and Merkley are all senators now, of course. Jensen is definitely on to something. Sure, great candidates and great campaigning can win races in any cycle. But what’s most important about the 2010 election is the anti-establishment sentiment that’s fueling voter rage. As President Obama said about Scott Brown, “the same thing that swept Scott Brown into office swept me into office. People are angry and they are frustrated. Not just because of what’s happened in the last year or two years, but what’s happened over the last eight years.”

Obama’s analysis is pretty spot-on. Democrats should remember that they are just as capable of tapping into voter frustration as Republicans are. After all, it’s what they did in 2008. But looking weak and confused and failing to pass a health care bill isn’t going to do the trick. People want change. Democrats should bring it. It’s the only way they can credibly promise voters that they’ll be bringing more.