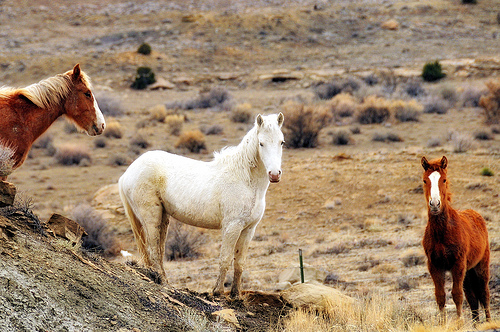 Photo by Flickr user <a href="http://www.flickr.com/photos/jasephotos/3360419169/">JasonBechtel</a> via Creative Commons

Few charges have earned such unanimous support as America’s wild horses. A grassroots movement was the catalyst for the 1971 law designating mustangs as “living symbols” of the West, protecting them from being hunted, captured, or otherwise harassed. Since then, government attempts to control the horses’ lives have been hotly contested. Unfortunately for horse lovers, the Bureau of Land Management (BLM) only sets aside so much land for wild horses to roam. So when horses multiply so that that their allotted land’s resources are depleted (and their designated habitat has been decreased by 30% since 1971) the BLM rounds up the “excess” horses and puts them out in government pastures.

Given the horses reduced habitat, it’s unsurprising that when the BLM started an aggressive round-up this year, equine advocates were hopping mad. Most recently, they allege that round-ups in Nevada have run nine horses to death. But as Michael Behar writes in the “The Mustang Redemption” from the current issue of Mother Jones (on newsstands now), these animals have few options. Unlike the 3 million cattle foraging public lands, the 33,000 wild mustangs on the range have no owners to pay the BLM for grazing rights. And there are nearly as many wild horses being kept in government pens as there are outside: feeding and caring for penned horses costs nearly $30 million a year, and is projected to more than double in two years.

To curb these costs, last fall Department of the Interior head Ken Salazar announced an overhaul of the nation’s wild horse program, an initiative that would include designating more land for horses out East, more aggressive application of equine birth control, and possibly making some herds eco-tourism attractions. But even with new rangelands, there are still far too many horses out on the plains, the BLM says. By its own estimates, the BLM must round up at least 10,000 horses every year to maintain a sustainable population. Last year it only gathered 6,400. With the horse population increasing by about 20% a year due to reproduction, this year the BLM will have to capture somewhere around 15,000 horses. With that many horses being chased by helicopter, funneled into holding pens, and transported to new land, it’s no stretch to imagine that more than a few of the fleet-footed animals will be injured or die during the process.