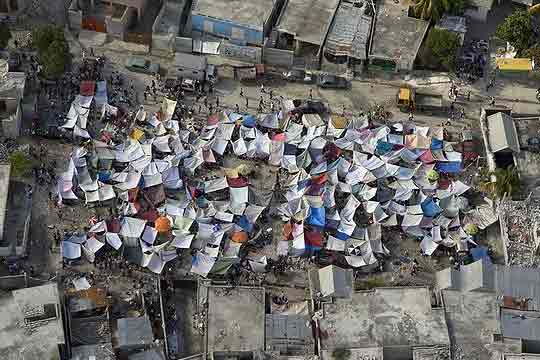 Obama isn’t the only world leader getting flak for granting Temporary Protected Status (TPS) to undocumented Haitian immigrants. A week after the disaster, Bahamian Prime Minister Hubert Ingraham announced that his government will release 102 Haitian detainees and give them temporary status. This didn’t fly well with many islanders, including former immigration minister Loftus Roker. The number of released detainees may seem small, but their discharge is a bold move because it counters the Bahamian capital’s pervasive anti-Haitian stance. Here’s what Roker had to say about Ingraham’s move:

Mr. Roker suggested that those released and granted Temporary Protected Status will either take jobs that struggling Bahamians need, or may not be able to find jobs and will become a burden on Bahamian society.

While seeking to assert his empathy for the Haitian people and respect for their history of struggle, he raised the point that the Bahamas is experiencing the highest unemployment levels ever, and last year had a record murder rate.

He suggested that if the government wants to help Haiti it should coordinate relief efforts and send donated supplies on Defense Force boats to the country and “those of us of Haitian abstraction can volunteer to go along and make sure those who need the goods get them.”

Roker later adds that he has “always had a Haitian barber” and “the government of the Bahamas has an obligation to the people of the Bahamas.” My mom’s family is native inhabitants of the Bahamas, and have held animosity towards Haitian immigrants since 1957 when President Francois Duvalier’s election led to a mass exodus. Faced with nationalist objections like these, leaders like Ingraham should be applauded for placing human need ahead of political ideologies. Countries listed below have followed the Bahamas’ example by granting TPS to Haitians already living within their borders, or opening their doors to prospective earthquake refugees:

French immigration minister Eric Besson has ordered his department to halt the repatriation of undocumented Haitian immigrants. Besson also announced the implementation of an “exceptional and temporary measure” to allow those affected by the earthquake to enter France. The measure includes providing “humanitarian” visas to people needing specialized medical care in France and allowing Haitians to visit family members.

Canada has expedited immigration applications from Haitians with family members living there. Jason Kenney, Canada’s immigration minister, said Haitians in the country will also be allowed to extend their stay. “We anticipate there will be a number of new applications, which we will treat on a priority basis,” Kenney declared.

The Dominican Republic has agreed to extend the stay of all Haitians already on the island by six months.

Senegal’s president Abdoulaye Wade called for Africa to make room for victims of Haiti’s earthquake to restart their lives on the continent.  “If it is just a few people, we will offer them a roof and a patch of land. If they come in large numbers, we will give them a whole region,” his spokesman said.

Several Caribbean governments, including the Turks and Caicos Islands, have suspended deportation of illegal immigrants, according to BCC Caribbean.