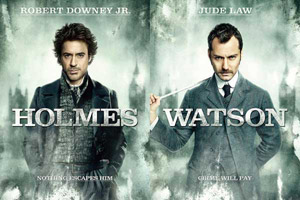 Last weekend, I finally got around to seeing the much-anticipated Sherlock Holmes flick. Directed by Guy Ritchie, it features Robert Downey Jr. and Jude Law as Holmes and Watson—sleuthing superheroes trying to thwart a sinister black magic plot.

In his review of the film, Roger Ebert remarked, “Both of them now seem more than a little gay; it’s no longer a case of ‘oh, the British all talk like that.’ Jude Law even seemed to be wearing lipstick when he promoted the movie on Letterman.” (Wait…that means he played a gay character?) And Robert Downey Jr. himself said on Letterman that Holmes may be a “very butch homosexual.”

Naturally, this suggestion isn’t sitting well with some folks. Hollywood honchos are apparently worried a homosexual subtext could drive away their audience.  And the executors of the Sir Arthur Conan Doyle estate have threatened to revoke Ritchie’s rights to the film if he tries any funny business in the sequel. Said Andrea Plunket, who controls the remaining US copyright: “I am not hostile to homosexuals, but I am to anyone who is not true to the spirit of the books.”

#1: Why does everyone think they’re homosexual? From what I saw, they’re two guys who are very close, protective, and fond of one another. So were the female leads in Sisterhood of the Traveling Pants, and no one called them lesbians. Might it have something to do with the peculiar way our society perceives masculinity and male bonding? Furthermore, why isn’t anyone assuming they might be bisexual—especially considering they both have female love interests in the film? (If only Kinsey were still around to help Americans with their rigid perceptions of sexuality).

#2: So what if they are gay? Putting a homosexual spin on existing popular entertainment is nothing new (see: Bert and Ernie, Fan Fiction). More importantly, the purist argument doesn’t really hold water. This is a film in which Sherlock Holmes is an ass-kicking action hero and the plot is straight out of The Da Vinci Code. If Sir Doyle is rolling in his grave, it’s not because his heroes may—or may not—be gay.