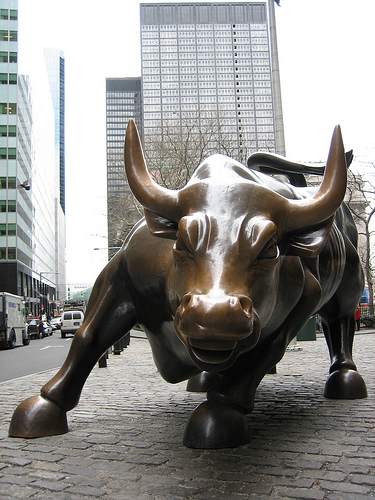 Like boxers sizing each other up and tossing the occasional jab, the opening hearing of the Financial Crisis Inquiry Commission got off to fairly predictable start this morning, with four of the biggest executives on Wall Street—Lloyd Blankfein of Goldman Sachs, Jamie Dimon of JPMorgan Chase, John Mack of Morgan Stanley, and Brian Moynihan of Bank of America—outlining their reasoning for why the meltdown happened and fielding questions on anything from lending practices to risk management to compensation from the 10-person commission.

The four Wall Street execs almost unanimously agreed in their prepared testimonies that the root of the financial crisis lay in the housing market, and more specifically, in predatory and reckless practices and products, like not verifying a borrower’s income for a loan or peddling mortgages where you can pick how much to pay or interest rates drastically reset after a few years. Those kinds of practices fueled a massive housing bubble, Dimon said, which in turn “helped fuel asset appreciation, excessive speculation and far higher credit losses” that spread throughout the financial markets. As banks and investors kept making larger and larger bets on both housing and other markets, they failed to adequately managing the risks that accompanied those outsized bets should they fail, Blankfein said, and when the housing bubble popped and so many of those risky bets soured, institutions like Lehman Brothers and Bear Stearns collapsed.

Boiled to its essence, that was what the four execs pointed to as the main root cause of the crisis. Aside from that, however, the morning’s questioning didn’t shed much light on anything. Daniel Indiviglio at The Atlantic bemoans FCIC chairman Phil Angelides’ apparent lack of finance know-how in his questioning of Blankfein (which I mostly agree with); and to be honest, none of the FCIC’s commissioners—barring perhaps former CBO director Douglas Holtz-Eakin—seemed to ask anything that hadn’t been covered before. Former congressman Bill Thomas did request that all four men to answer the questions featured in today’s New York Times op-ed page—questions far more probing than what the FCIC asked.

But in all fairness, the commission is just getting warmed up and I’m sure their work will only get better going forward. Especially if do the gritty, investigative work that my colleague Nick Baumann writes about today, like subpoenaing documents and records and even tracking down whistleblowers for testimony. That’ll bring out the juicy details that can really shed some light on what happened behind the scenes, the kind of decisions and actions that Lloyd Blankfein or Jamie Dimon are never going to share.