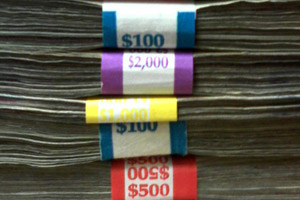 Earlier this month, Afghan President Hamid Karzai fought back against allegations of pervasive graft within his government, telling Al Jazeera that “the Western media has blown corruption totally out of all proportion in Afghanistan.”

Perhaps Karzai should have a conversation with Antonio Maria Costa, the United Nations’ drug and crime czar. His office released a report on Tuesday concluding that in the past year Afghans paid out $2.5 billion in bribes and kickbacks—the equivalent of 23 percent of the country’s gross domestic product. The income generated by corruption is exceeded only by the booming opium trade, which brings in an estimated $2.8 billion annually. “In other words, this is shocking, drugs and bribes are the two largest income generators in Afghanistan,” writes Costa, who heads the UN’s Office on Drugs and Crime (UNODC), in the preface of the study.

The report, based on interviews with 7,600 Afghans, is yet another indicator that any US policy on Afghanistan that is predicated on cooperation with the government is threatened by endemic graft. As it stands, writes Costa, “It is almost impossible to obtain a public service in Afghanistan without greasing a palm: bribing authorities is a way of life.”

The average payoff, according to UNODC, was $159—a modest sum in Western terms, but a massive expenditure in a country with a per-capita income of $425. This, Costa says, amounts to a “crippling tax on people who are already among the world’s poorest.” And he notes that the massive influx of aid funding coupled with soaring drug revenues “have created a new cast [sic] of rich and powerful individuals who operate outside the traditional power/tribal structures and bid the cost of favours and loyalty to levels not compatible with the under-developed nature of the country.”

According to the study, 59 percent of Afghans identified corruption as their biggest concern—more worrisome even than the deteriorating security situation and widespread unemployment. “It’s really depressing,” Costa told me on Wednesday from Prague. “From the outside I would have expected that the bombing and the killing and the poverty would have been identified as the most severe problems the country is facing, but no, the [Afghans] are saying it’s the corrupt leadership. That is sending a very strong message. Perhaps we are underestimating the importance of governance in fighting the other severe illnesses of the country, drugs and development and so forth.”

US and international officials have leaned heavily on Karzai to tackle rampant corruption, and the issue is likely to figure heavily when world leaders convene next week in London for a conference on Afghanistan’s future. Presently, says Costa, members of the Afghan government are not doing their part to fight graft. That’s not entirely surprising, since Afghan officials—on both the local and national level—appear to be the ones profiting most handsomely from bribes and kickbacks. According to the UNODC’s study:

Around 25% of Afghan citizens had to pay at least one bribe to police and local officials over the past year. Between 10-20% had to pay bribes to judges, prosecutors, doctors and members of the government. A kickback is so commonly sought (and paid) to speed up administrative procedures, that more than a third of the population (38%) thinks that this is the norm.

The widespread corruption, Costa says, has given Afghans “the impression that it is cheaper to buy a judge than to hire a lawyer.” And according to the UNODC’s findings, Afghans don’t believe the corruption problem is confined to their government. Fifty-four percent of those surveyed said they believed that international organizations and NGOs “are corrupt and in the country just to get rich.”

Costa told me that the large amounts of development money “consumed” by “transaction costs” (that is, funds eaten up by the organizations providing aid and heading up development projects), along with “all the opacity” surrounding procurement, has fueled the perception among Afghans that “the international community and NGOs are not as clean as they would like.”

These suspicions are surely warranted: Numerous instances of fraud and corruption in Afghanistan involving contractors, US military officials, and others have been extensively documented. Among those accused of corruption is the former Afghanistan country director of the UN’s Office of Project Services, Gary Helseth, who allegedly used funds intended to rebuild Afghanistan’s infrastructure to bankroll his own lavish lifestyle. And according to the office of the US Special Inspector General for Afghanistan Reconstruction, only a quarter of the corruption cases it’s investigating involve Afghans—the rest are cases targeting at least one Western suspect.

Costa compares Afghanistan’s corruption problem to a “cancer” that is eating away at Afghan society—and he says the remedy is both preventative and surgical. In addition to bolstering Afghanistan’s lead anti-corruption authority, he says Afghan officials should be forced to file financial disclosures: “Let’s see how senior officials can afford fancy cars and flashy villas with salaries of less than $500 a month!” And, when it comes to the appointment of provincial governors and district leaders, Costa suggests the vetting process should potentially include polygraph exams. As for the surgery, he says, “We need to remove the characters—the governors, the politicians, the members of parliament and whoever else has been tainted, not by the allegations, but by the evidence of corruption.” He added, “Corruption in particular is an issue where the domestic leadership needs to manifest itself. There has to be leadership by the Afghans and in particular the president in bringing about integrity and fighting corruption.”

While Karzai has vowed repeatedly to tackle corruption, Western officials and analysts have privately expressed doubts about his commitment. And his comments to Al Jazeera downplaying the issue surely didn’t help. If Karzai can’t even acknowledge the extent of the problem, how can the US or its international partners rely on him to solve it?