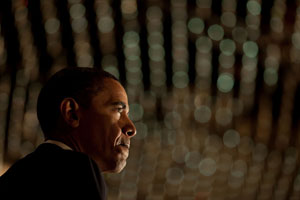 Two days after Republican Scott Brown’s upset win in Massachusetts, the Obama administration proposed two new measures that would limit the ability of big financial institutions to wheel and deal. In announcing these initiatives—one of which would prevent investment banks from playing the market with their own cash—President Barack Obama got rather feisty:

What we’ve seen so far, in recent weeks, is an army of industry lobbyists from Wall Street descending on Capitol Hill to try and block basic and common-sense rules of the road that would protect our economy and the American people. So if these folks want a fight, it’s a fight I’m ready to have. And my resolve is only strengthened when I see a return to old practices at some of the very firms fighting reform.

Ready for a fight—that was the message. White House reporters later that day grilled press secretary Robert Gibbs and economic aide Austan Goolsbee on why the administration was poking at the banks at this particular moment, implying that Obama was revving up a populist attack in response to the Democrats’ demoralizing loss in the Bay State. Gibbs and Goolsbee insisted that the release of these proposals had been planned since before Christmas. Gibbs also noted repeatedly that the president was committed to “fighting for what’s important to the middle class.”

Whether or not the Obama crew rushed out these measures, the more important question is this: if Obama now intends to be a populist battler, how hard will he fight?

Obama and his aides certainly believe he’s been pounding away for the past year—to pass the stimulus bill, to win congressional approval of his budget, to expand the children’s health insurance program, to cut several wasteful Pentagon programs, to enact credit card reform, to win support for climate change action, to advance financial reform, to win passage of a jobs bill, to move health care reform through the House and Senate. In the prepared remarks for a town hall meeting he held in Elyria, Ohio, on Friday, Obama declared 14 times that he’s been “fighting.” He vowed, “I’ll never stop fighting for you.” A few hours later, Obama tweeted to his 3.1 million Twitter followers, “So long as I have the privilege of serving as your President, I’ll never stop fighting for you—on #HCR [health care reform] and so much more.” And in his weekly address—finalized on the same day—he decried the influence of “special interests” and promised, “I’ll never stop fighting to make sure that the most powerful voice in Washington belongs to you.”

Yet Obama has rarely come across as a fighter during his first year in office. He frequently seemed more preoccupied with working an insider’s game than confronting the interests and legislators standing between him and his policy objectives. With health care in particular, it looked as if he was playing three-dimensional chess in a mud pit. Proceeding as a calculating operator, rather than as an in-your-face brawler, Obama has indeed won legislative tussles and remains close to sealing a deal on health care. But if he wants voters to believe he’s a fighter, Obama needs to show them, not tell, them.

Obama is not naturally combative. The week before his populist eruption, he presented a less confrontational attitude toward the banks. While proposing a tax on big banks to cover the TARP bailout funds not being paid back, Obama didn’t explicitly pick a fight with the financial industry. He entreated it to cooperate:

What I’d say to these executives is this: instead of sending a phalanx of lobbyists to fight this proposal, or employing an army of lawyers and accountants to help evade the fee, I suggest you might want to consider simply meeting your responsibilities. And I’d urge you to cover the costs of the rescue not by sticking it to your shareholders or your customers or fellow citizens with the bill, but by rolling back bonuses for top earners and executives.

Instead of clobbering banks and lobbyists seeking to block this initiative, Obama was attempting to convince them to back off.

That’s been the typical style of this administration. On Wednesday, I asked Gibbs about a recent Wall Street Journal report that Senator Chris Dodd, the chair of the banking committee, was considering dropping the White House’s proposed Consumer Financial Protection Agency. “Is that something that the President would actually get angry about,” I inquired, “and has he conveyed that sentiment to Christopher Dodd already?” Gibbs replied:

He’s conveyed that—well, Senator Dodd was here yesterday, as the [press] guidance suggested, and the President addresses this morning in his interview that financial reform has to include a consumer protection agency. That’s what he’s talked about for quite some time, and that’s what he continues to want.

Not exactly mad-as-hell rhetoric. If the White House had come down heavier on Dodd, a fellow Democrat, Obama could have picked up easy points as a fighter. The soundbite writes itself: “We respect Senator Dodd and appreciate his various contributions to enacting the president’s agenda. But the President is clear on this: he will oppose any Democrat or Republican who sides with the big banks and tries to prevent us from setting up an agency to protect consumers from the sleazy practices of big banks and financial institutions.” Okay, maybe strike “sleazy.” But it’s not that difficult to display some fight.

The following day, Gibbs was asked if the White House was anticipating and preparing for a major political battle over the just-unveiled financial reform measures. He again missed an easy opportunity to exhibit White House fire:

I don’t doubt that—this happened before we broke for Christmas, that when some of these activities were being voted on, that scores of lobbyists were called to Capitol Hill to generate activity in opposition to financial reform. I have not sensed a retrenchment by those lobbyists on this issue and I think the special interests, in order to protect the good that they have, will do all they can to derail what’s good for the American economy.

There was nothing technically wrong with that answer. But it was not exactly loaded with passion. An hour or so earlier, Obama had proclaimed he was ready, even eager, for this fight, yet the White House did not seem to be on a war footing.

What happens in Washington—especially on complicated matters such as health care and financial reform—can, no doubt, appear like an incomprehensible swirl to voters who don’t follow the ins and outs of the legislative rigmarole. To these voters, Obama’s role in this jumble probably seems confusing. He’s been sucked into the mess. For instance, he’s overseen the generous bank bailout and stocked his administration with Big Finance insiders, while also talking about cracking down on financial institutions. He’s refused to state clearly his preferences for critical aspects of health care reform, while the White House has engaged in closed-door dealmaking with legislators and industry representatives to win votes. What Obama’s really fighting for can be hard to discern.

Consequently, if Obama aims to be widely regarded as a warrior for the middle class, he will have to take some mighty swings that cut through the clutter. Proclaiming “I am a fighter” will not be enough. He will have to name his foes (financial institutions, insurance companies, Republicans, and perhaps recalcitrant Democrats) and truly exchange blows. He may even have to lose a high-profile battle or two to persuade voters he is slugging away on their behalf. Muhammad Ali talked a good game, but he fought a better one. A true populist pugilist is defined not by his words, but by his actions, and a year into his presidency, Obama has not yet lost one of the more valuable presidential assets: the ability to define himself. He can still be a populist, if he acts like one.