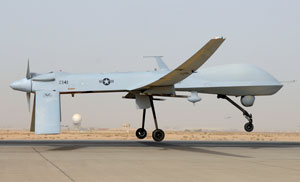 A MQ-1B Predator aircraft takes off in Iraq. If you hear a Predator hovering above you in Pakistan, you’re probably in for a very bad day. (U.S. Air Force photo by Senior Airman Julianne Showalter.)Just where in the Constitution and laws of the United States does President Obama locate the power to have people in nominally friendly countries blown up by our armies of flying robots? On Wednesday, spurred on by reports of the increasing use of drone strikes against suspected terrorists in Pakistan (and corresponding reports of increased civilian casaulties), the American Civil Liberties Union filed a Freedom of Information Act (FOIA) request (PDF) seeking information about the government’s legal justifications for its drone program. In a post on the ACLU’s “Blog of Rights,” Jonathan Manes explains why the ACLU is doing this:

The use of unmanned drones to target and kill individuals is a profoundly new way of waging war. For the first time, military and intelligence officers can observe, track, and launch missiles at targeted individuals from control centers located thousands of miles away, without any significant U.S. presence on the ground. The technology also permits the United States to target individuals nearly anywhere in the world….

The ACLU believes that the use and proliferation of this tactic must be the subject of public scrutiny and debate. But the government has released essentially no information about the legal basis of and limits on the drone program, or its scope and consequences. The public has been kept in the dark and is therefore unable to assess the wisdom or legality of the strikes. Commentators on all sides agree that these are not questions that should be decided solely by technocrats behind closed doors.

In order to fill this void, the ACLU is asking the government to release basic information about its use of drones to execute targeted killings.

This seems like an eminently reasonable request that can be mostly complied with without violating national security. We’ll see what the Obama adminstration thinks.