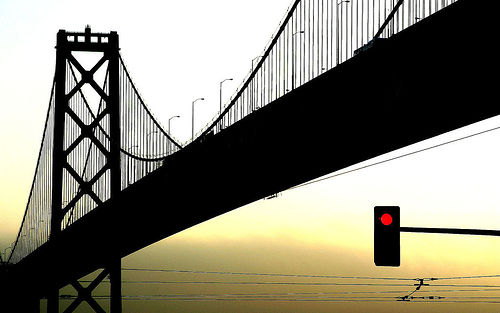 We know you’re cash-strapped, California, but that new east span of the Bay Bridge is going to cost you, big time.

That’s according to exhaustive research by SF Public Press and published in McSweeney’s Panorama this week, detailing the history of San Francisco’s lesser known bridge and tagging its cost to taxpayers and commuters at more than $12 billion—double what we’ve been told so far by public officials.

Part of what’s causing the extra expense is the fact that political wrangling—over design, over funding, over everything state and local politicians wrangle over—has delayed the project by decades, to the point where interest and other financing charges have ballooned into the billions. As a result, commuters will be paying it off until at least 2049, the report says.

Officials have known this for a while. They just didn’t tell us. Why not?

“I don’t think we’re hiding it,” Brian Mayhew, chief financial officer of the Bay Area Toll Authority, told the reporters. “Just no one has ever asked before.”

Gee, that’s odd, since there are stories about Bay Bridge cost estimates basically every day.

Plus, a two decade delay is pretty ridiculous, given that the whole idea for renovating the bridge came up after the 1989 Loma Prieta earthquake collapsed part of the east span. So naturally, it was a good decision to try and make sure that next time Mother Nature strikes, the same public infrastructure doesn’t collapse. Not such a good idea, however: Dithering about for two decades before actually making it happen.

Panorama on why it’s costing so much and taking so long:

This project has outlived many a political career, including those of San Francisco Mayor Willie Brown and Governor Gray Davis, and countless other legislators from the Bay Area and in Sacramento. Most of the officials who green-lit the project are long gone, and the lack of continuity in state and local leadership represents a challenge all its own. There aren’t many lawmakers in Sacramento with a long history in their current positions, and fewer who know much about the Bay Bridge.

This lack of governmental memory on such a marathon construction project—combined with knowledge that many costs can be pushed far into the future—and coupled with overly optimistic cost estimates, helps to explain why the stated price of construction has grown nearly fivefold, from the $1.3 billion estimated in 1996 to more than $6.3 billion today.

That $6.3 billion, mind you, is the projected cost of salaries and construction materials only. The difference between that and the $12 billion figure? The actual cost of those things, plus crazy finance charges.

Some other interesting points the story raises:

Researched and written by SF Public Press, this roughly 9,000-word whopper of story appears in the new San Francisco Panorama, McSweeney’s single-edition mag-style newspaper. And if that’s not collaboration enough, the piece was funded by more than 140 people through our friends at Spot.Us.

A gratuitous aside: Pieces like this are just another indication that the future of news may involve more working together, something we’ve been finding out with our own Copenhagen News Collaborative. Caring leads to sharing, which leads to more eyeballs from more people on more coverage of issues that matter, like the future of the planet and whether the bridge you commute to work on is going to collapse on you.

Check the story out on the front page of SF Panorama, available to locals in bookstores and to out-of-towners, online. But hurry. We hear copies are going, going, gone.