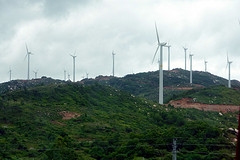 Photo by dcmaster under Creative Commons

The Clean Development Mechanism, a UN body which helps industrial countries like China cut emissions by paying undeveloped countries to cut their emissions instead, has saved the Chinese government millions of dollars. But many environmentalists worry that China’s renewable energy projects, particularly its wind farms, do not fulfill the CDM’s “additionality” requirements. In other words, they could be receiving foreign funds for projects that would have been built anyway. Responding to these concerns, the CDM has suspended some Chinese wind farms until it can be proven that they meet additionality requirements.

Officials in China were predictably opposed to the decision:

CDM officials raised questions after Beijing cut prices that utilities would be required to pay for wind power, said Lin Wei, general manager of Easy Carbon Consultancy Co. in Beijing, a consultant for CDM projects. Such a price cut might make projects appear to need more foreign financing by reducing their revenues.

“They thought the government believed CDM money would be coming in anyway so the government was making prices lower so that Chinese projects could have extra ‘additionality’ to get extra funding,” Lin said.

“Of course we don’t agree” with the CDM board, Wang said. “They totally know nothing about the real situation in China’s wind power (industry).” (emphasis mine)

In the current issue of Mother Jones, Mark Schapiro writes about CDM’s potential for manipulation by developed countries and international corporations, and a carbon sink dilemma in Brazil that has displaced the region’s indigenous population. Heading into the Copenhagen Climate Conference, the UN’s decision to crack down on China’s wind farms could signal heightened accountability for the CDM and carbon sinks. But will it only make China a more difficult bargaining partner?