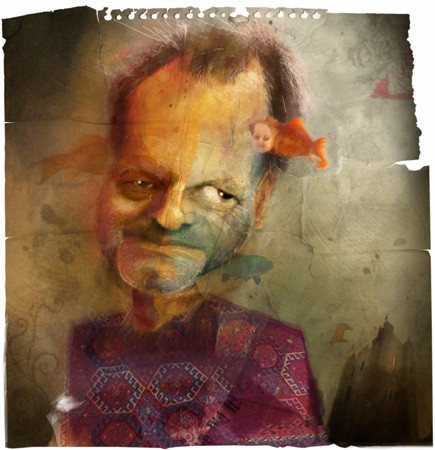 By Flickr user <a href="http://www.flickr.com/photos/ruy_xw/">Ruy</a> under a CC license.

It’s been four years since Terry Gilliam’s last film—the surreal Tideland, starring Jeff Bridges. Now, for Christmas, the Monty Python animator-turned-filmmaker has given us The Imaginarium of Doctor Parnassus, a production that was a roller coaster ride even by Gilliam standards. (Speaking of which, Gilliam is taking another crack at The Man Who Killed Don Quixote—and Robert Duvall has reportedly agreed to play the lead.) Imaginarium is very Terry, with more than a small dose of the Python vibe. It’s a dark, absurdist joyride pitting imagination against apathy and an ancient protagonist (Christopher Plummer) against the Devil (Tom Waits). It’s a lot of fun. Go see it.

I spoke with Gilliam about how the film was thrown into complete disarray by the death of leading man Heath Ledger. That’s a familiar narrative by now, but we also talked about the director’s upbringing, his neuroses, his rep as a Hollywood nemesis, and his decision to give up American citizenship—not to mention sign that controversial petition in support of Roman Polanski. And of course, we talked about the constant struggle to sell his ideas: “It’s enough hard work making the movie, and then you have to go out and blow the trumpet and beat the drum and do all these things,” he told me in a bit that didn’t make the edited interview. “Actually this part of the selling, at the end, is just repetitious. The difficult selling is at the beginning, trying to get the money.”

For a couple of years after Gilliam first arrived in England, he was doing the same stuff he’d done back in the States—illustrations and magazine editing and all that. Then he approached soon-to-be Python star John Cleese, whom he knew through his old job at Harvey Kurtzman’s Help magazine. (Kurtzman was the guy who did Mad magazine when it was still a comic.) “John was well known in television by then, and I said, Introduce me to somebody in TV,” Gilliam said. “That led me to a show called Do Not Adjust Your Set that Michael Palin and Terry Jones and Eric Idle were writing and performing. And that was the beginning of that relationship. I started doing animation in one of the episodes. And off we went.”

Though Gilliam had his start in television, he still hates the damn box. He was raised on radio, and credits it for some of his inventiveness. But there was a boob tube in the picture when he raised his three kids—all were part of the Imaginarium crew, Amy (Rainbow) Gilliam as a producer, Holly (Dubois) as a publicist, and Harry (Thunder) as a graffiti artist. Papa Terry recalled for me how Harry had related to TV as a youngster: “We had a house in Italy, there’s no television, there’s no telephone, it’s very basic,” he said. “For the first couple days, he’d be bored out of his mind. And then he would start playing—oh, there’s that stick there, and a bit of string, I’ve got a bow now! Now I’ll make an arrow. And little by little, you start doing things. And he’d become incredibly inventive. And then, the minute we come back to London, he’d go to his room and turn on the television set and the brain would go dead again.”

According to a bio submitted to imdb by Holly Gilliam, young Harry is now a solid athlete—soccer and swimming—and model who hopes to attend art school. Nickname: Hairball. What does it all mean? I dunno. Use your imagination. And enjoy the interview.