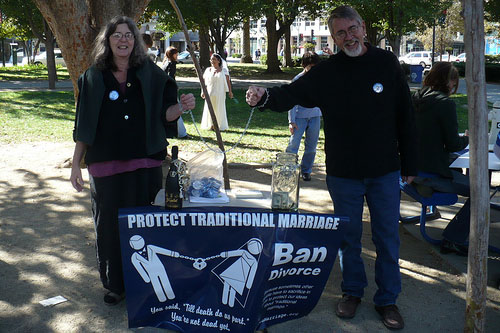 Perry vs. Schwarzenegger comes to the San Francisco federal court building next month, and promises to be one of the most important gay rights cases to date. The plaintiffs argue that the ban on gay marriage in California is unconstitutional, and the case is generally expected to reach the Supreme Court. For more on Perry vs. Scwarzenegger, see Gabriel Arana’s excellent article in The American Prospect.

Meanwhile, on a lighter (but related) note, Sacramento web designer John Marcotte has introduced an initiative to ban divorce in California. The 2010 California Marriage Protection Act, introduced by the married father of two, is meant to lampoon the gay marriage ban. From the CMPA’s Web page:

RescueMarriage.org is the brain-child of concerned Christian and political activist John Marcotte, who felt strongly that Prop 8 did not go far enough in protecting traditional marriage. With the help of attorneys and friends, Marcotte is attempting to ban divorce in the State of California.

The initiative has been reported at NPR and the Huffington Post, and David Kirp, who teaches at UC Berkeley’s Goldman School of Public Policy, wrote an interesting piece about it in today’s San Francisco Chronicle. From Kirp’s analysis:

The Catholic Church condemns the “mortal sin” of divorce. Wouldn’t the clerics have to embrace an initiative that prohibits it? And what about the Mormons, who preach that divorce is the result of not living the Gospel – wouldn’t they have to endorse it?

What an ingenious way to expose the hypocrisy of California’s gay marriage ban. Now all Marcotte needs is 700,000 Californian signatures to get the initiative onto the ballot.