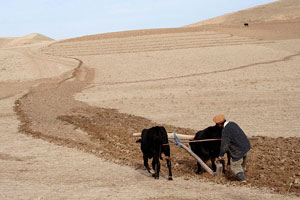 One week after President Obama announced new targets for Afghanistan, General Stanley McChrystal, the military commander in Afghanistan, and US ambassador to Afghanistan Karl Eikenberry expressed their support for the newly revealed plans.

The previously feuding but presently affectionate General and Ambassador defended the President’s strategy before the House and Senate Armed Services Committees on Tuesday. Amidst answers to questions on Osama bin Laden and the July 2011 target for withdrawing troops, both McChrystal and Eikenberry came back to a central theme, agriculture, as a key part of eventual success in the region. Referring to the Department of Defense’s agricultural program that was employed decades earlier in South and Central America, the two men emphasized the critical rural infrastructure support that Agri-business Development Teams (ADT) will provide for the region.

ADTs are comprised of national guardsmen and women who are working with Afghanis following the guidance from US Department of Agriculture officials stationed in Kabul. By teaching “critical skills in marketing, storage, and even ice production” the DoD hopes to bolster exports, and thus revive Afghanistan’s agricultural economy and diffuse the economic power held by the Taliban’s drug trade.

This focus on agriculture is part of a larger effort initiated by President Obama to better coordinate US, NATO, and Afghan efforts in defeating the Taliban. At Tuesday’s hearing, Eikenberry said there will be 65 ADTs operating in Afghanistan by January which are “going to get great effects.”

Gen. McChrystal even went so far as to say that the agricultural component “is what makes security durable.”