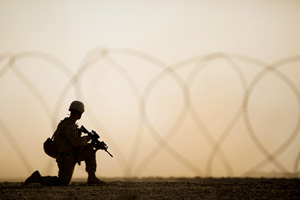 President Barack Obama is surging a war to end it.

That’s how he’s selling his decision to expand the mess in Afghanistan he inherited from George W. Bush and Dick Cheney. In a much-anticipated speech Tuesday night that followed weeks of high-level deliberations, Obama announced what had already been purposefully leaked by the White House: that he has ordered another 30,000 American soldiers to Afghanistan. This deployment—in keeping with the request put to him by General Stanley McChrystal, the commander of US and NATO troops—will raise the total number of US troops to nearly 100,000 by next summer, ten times the force level in 2003. But speaking before an auditorium of cadets at West Point, Obama contended that the boost in troops will be temporary, a means to “create the conditions for the United States to transfer responsibility to the Afghans” for securing their own country and, most important, keeping the Taliban and al Qaeda at bay.

Obama even created what appeared to be a deadline: that transfer will begin by July 2011. Yet it’s not really a deadline. As administration officials explained during a conference call a few hours before the speech, Obama is not setting a hard target date for withdrawing US troops from Afghanistan. They said there is no timetable for completing this transfer process and that this transition will take as long as it takes, depending on what’s happening on the ground. Consequently, Obama’s Afghanistan message continues to be mixed. He declared that “a sense of urgency” is propelling this new deployment. He stated that “our cause is just, our resolve unwavering.” He said that this expansion of the war “is in our vital national interest.” But apparently only for 18 months. Yet it may actually be for longer, if the conditions don’t permit a handover at that point.

It’s a bit of a muddle. Moreover, the transfer that is at the core of Obama’s policy depends on the government of President Hamid Karzai. Obama is betting a lot on an entity that has so far proved to be inept and corrupt. In his speech, he acknowledged that the Kabul government has “been hampered by corruption” and that Karzai’s recent reelection was “marred by fraud.” (That was putting it politely.) Obama also observed that Kabul has been unable to stand up sufficient security forces—and that Afghanistan, under Karzai, “has moved backwards.”

During that pre-speech conference call, a senior administration official—who was speaking on background—told reporters that Obama’s aim is to create a “window of opportunity,” during which the Afghan government can get its act together. There is some logic to this. If US forces can push back the resurgent Taliban for a year and a half, the central government will have more room to develop its own governance capacity and bolster its security forces. But this does seem a rather heavy lift. How much of a turnaround is possible in this timeframe?

In the speech, Obama referred to no benchmarks for Karzai government. He devoted plenty of words to the usual national security platitudes—references to the greatest generation and such—but said nothing about what might happen if Karzai fails to use the window created through the sacrifice of American blood and treasure. (The expansion of the war will cost $30 billion in the coming year, upping the total annual tab to about $100 billion—which is the per-year cost of the health care reform legislation.) If come July 2011 there is no credible partner at the other end of the transfer, what happens?

Karzai has not inspired confidence. He has groused that the United States doesn’t really care about his country, and he had to be whipped into agreeing to a run-off after being reelected in that contest marked by extensive fraud.

It’s hard to escape the partner issue. The night before Obama’s speech, the president held an hour-long teleconference with Karzai. As is customary, the White House released a “readout”—that is, a short summary—of the conversation, and it underlined the potentially fatal flaw in Obama’s strategy. That readout noted, of course, that Obama and Karzai had reaffirmed “their commitment to work closely together” and had discussed “a range of related issues, including, security governance, corruption, economic development and regional relations”—without describing what the pair had actually said about any of this. But then, the readout reported, Obama had “underscored the need for more rapid development of the Afghan National Security Forces so that Afghans themselves can assume greater responsibility over the security of their country.” Even in bland readout-speak, this sentence was telling. At this stage, why should Obama have to inform Karzai that he has to move faster to beef up his military forces in order to protect his own nation (and government)? If Karzai were a worthy partner, wouldn’t he already be doing so?

During the speech, Obama firmly rejected the Vietnam analogy, noting that those who compare Afghanistan to that war are engaged in “a false reading of history.” Obama rightfully noted that in Afghanistan “we are not facing a broad-based popular insurgency” and that Americans were “viciously attacked from Afghanistan.” But Obama skipped one part of the Vietnam debacle that perhaps offers a cautionary tale for today: the United States’ partner in Vietnam was also a government riddled with corruption and alienated from the public. There was nothing in Obama’s speech that directly addressed the leaked cables Karl Eikenberry, the US ambassador to Afghanistan, sent to Washington, in which he said that more troops should not be deployed until the Karzai government demonstrates it can reform itself.

Obama did pound the basics: the Taliban must be countered so Afghanistan is never again protected territory for the mass-murderers of al Qaeda, who, the president said, seek nuclear weapons. Prior to the speech, polls showed that about half of the American public was skeptical about the Afghanistan war. Presumably, these Americans already know al Qaeda’s plotters are evildoers. So this speech is not likely to sway millions. But what’s been said a few thousand times in the past few days is definitely true: Obama has now made the Afghanistan war his own. This speech was just the opening shot in what will be a never-ending campaign to explain and justify a war that itself may be never-ending.