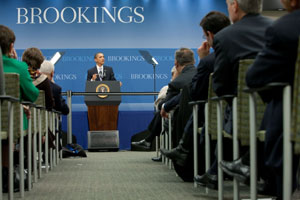 President Barack Obama has spent much of his term, from the stimulus bill pushed through shortly after he took office, up to this morning’s speech on jobs at the Brookings Institution, trying to show the public that he is serious about reducing the unemployment rate. Today, with 15.4 million Americans looking for work and tens of millions more joining the ranks of the long-term unemployed, the president announced a series of small business tax cuts, infrastructure investments, and aid measures to build on the Recovery Act, which the nonpartisan Congressional Budget Office estimates has already saved or created some 1.6 million jobs. The speech, which a senior administrative official said was primarily intended to “get ideas out there,” was encouraging but left many questions unanswered.

The components of Obama’s new jobs plan that were apparently intended to appeal to his Democratic base were the green building and aid measures. In a statement issued shortly after the speech, Lawrence Mishel, the president of the progressive Economic Policy Institute, noted that he was “particularly enthusiastic about the president’s proposals for infrastructure investments and assistance to state and local governments.” The speech also included support for a much–discussed “cash for caulkers” program modeled on the popular cash for clunkers scheme. There are questions about how Congress would motivate homeowners to take part. After all, consumers are more accustomed to purchasing cars than insulation. But Dean Baker, the director of the Center for Economic and Policy Research, said he was still “fairly certain” cash for caulkers would stimulate job growth. The public’s response will largely “depend on how generous we’re prepared to make [the subsidies],” Baker added.

The lack of specifics in Obama’s speech was troubling. Former Labor Secretary Robert Reich said the president’s rhetoric on job creation and deficit reduction “doesn’t measure up.” Obama repeatedly talked about “paying down our deficits” without giving any specific programs he would cut or taxes he would raise.  Before the speech, senior administrative officials suggested that money to finance the job creation measures would be available because of the “fiscal room” created by winding down the Troubled Assets Relief Program, which has cost the government an estimated $200 billion less than originally expected. But, as Baker and others have pointed out, re-appropriating money the government was planning to spend is “not really reducing the deficit”—it just makes the spending “easier to sell to Congress.”

Many of the ideas the president did outline were dubious policies that Republicans have been advocating. Baker and Mishel both question the value of the measures aimed at small businesses. “The constellation of tax cuts aimed at small business seems to be a roundabout way of addressing the very real problem of credit availability,” Mishel wrote. Baker was more dismissive of GOP-appeasing provisions, noting that “90 percent of what is done for small businesses is pure politics and bad economics.” In his speech, Obama cited an oft-repeated figure about small business job creation: “Over the past 15 years, small businesses have created roughly 65 percent of all new jobs in America.” What he neglected to mention is that they also lost the vast majority of jobs as well. Perhaps with that fact in mind, Mishel pointed out that while the proposed “jobs creation tax credit holds promise for generating more jobs, it doesn’t make sense to limit its impact by aiming it only at small firms.”

One particularly troubling provision of the small buisness measures Obama supports is a plan to eliminate all small business capital gains taxes for an as-of-yet unspecified period. Asked whether a large bank like Goldman Sachs could set up a small business subsidiary to avoid taxation, Baker acknowledged that “they very well could.” The definition of “small business,” the upper level revenue limits for the designation, and the time period of the capital gains tax waver are all crucially important to the success of this proposed provision. Baker warned that “every small business owner who’s not too dumb to read will list their income as zero,” and pay themselves entirely in stock—an accounting trick used by private equity executives to avoid the top tax bracket.

Although the president had a few harsh words for “an opposition party which, unfortunately after having presided over the decision-making that led to the crisis, decided to hand it over to others to solve,” the GOP has to be (secretly) happy with many of the job creation measures the president promised in his speech. Senate Majority Leader Harry Reid announced that he looks “forward to working with the president, his administration, and the House to put these promising initiatives into action.” If this jobs program is to emerge from the Senate in a functional form, Obama will have to fight hard to ensure that the bill is not overburdened by additional Republicans favors added to the pile of gifts he has already promised them.