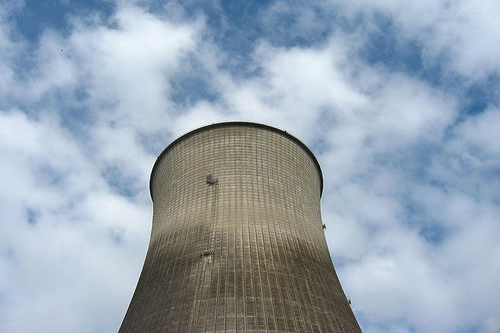 Well this was predictable. This Monday, Unistar Nuclear Energy, the Maryland-based nuclear company, asked the Nuclear Regulatory Commission to suspend its application to build a new power plant on New York’s Nine Mile Island. A spokesman for Unistar said that the project could not proceed without adequate federal loan guarantees, which essentially pass the project’s risk on to taxpayers. Since Unistar began planning its new generation of nuclear power facilities, the dirty truth has been that it can’t get the funding it needs unless the government pledges to take care of the risk.

As Mariah Blake reports in the January/February issue of Mother Jones, six of the country’s largest financial firms, including Citigroup and Goldman Sachs, wrote a letter to the DOE in mid-2007 saying they would not fund nuclear projects without complete government support. And although the US has bailed out the nuclear industry before, it looks like we’re gearing up for another round of nuclear subsidies:

Most of the industry is banking on a similar strategy—and in the climate legislation staggering through Congress, it just may have found the vehicle. Key Senate Democrats have signaled that they are willing to use nuclear subsidies as a bargaining chip to overcome Republican opposition. The Nuclear Energy Institute (NEI), the industry’s main lobby, is pushing for at least $100 billion in federal loan guarantees—a dicey proposition given that the Congressional Budget Office has determined that the risk of default would be “well above 50 percent.” This raises the question: Will the cost of passing a climate bill be a massive, taxpayer-funded nuclear bailout?

World leaders probably won’t discuss nuclear energy at length at this month’s climate conference in Copenhagen. But the US nuclear industry is sending a representative to convey the message that nuclear energy is the “largest scalable and most efficient source of emission free electricity” and perfect for “low lying countries like Bangladesh and the Netherlands, small island developing states, and the world’s least developed countries.” Someone should ask the residents of Tuvalu, a drowning island nation, whether they’d prefer nuclear energy or a binding international climate treaty. I’d bet on the latter.